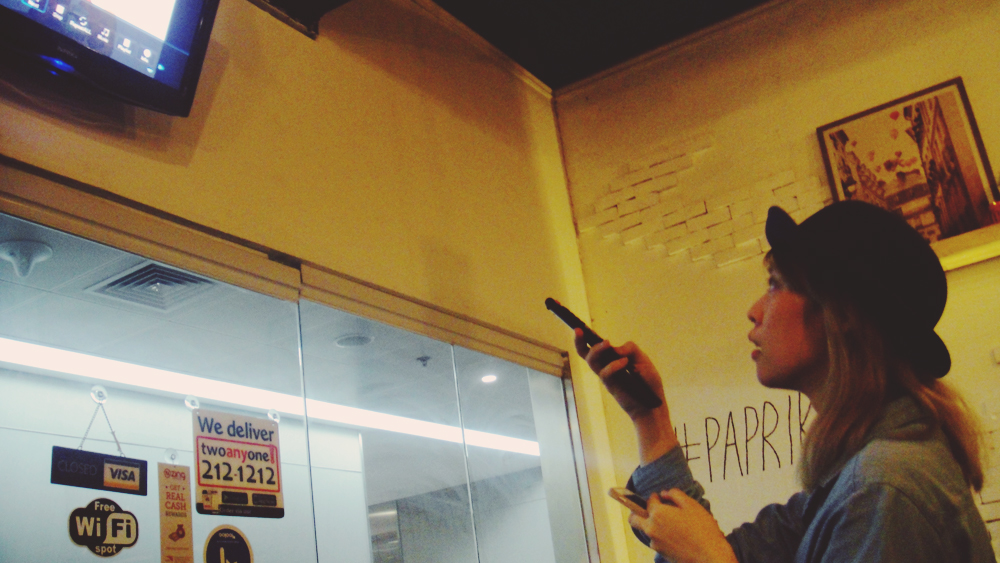 It's oddly fascinating, seeing people enter a door tentatively, feeling a bit apprehensive, not certain whether they're in the right place or not. Or maybe they know, but they don't quite want to take that risk. You see the door and walk past it, your feet quickly bringing you to the restroom, allowing you to wash your face and your hands, and take stock of what exactly you've gotten yourself into.

And then you realize that, yes, you know what you've gotten yourself into, and yes, you have to go through that door sooner or later.

"For the workshop?" she asks.

"Ah, over there," I say, pointing - without using fingers, much like one of those SM employees do - to her left, where a gaggle of similarly antsy people were.

Rainy is one of those antsy people, but then again, she's always antsy. But then again, we're all antsy. We're all antsy when we feel like strangers in a new place, surrounded by new people. She sat there alone, or not quite; there was someone else in her table, a girl named Rhoda, but I don't think they were talking. The table next to them was full, of six girls, obviously friends, quietly giggling about things. I was on yet another table, separate from the throng, because I'm not technically part of the workshop.

And that's what made me antsy, too. What exactly am I supposed to do here? Well, I am accompanying Rainy. What a boyfriend-ly thing to do, accompanying his girlfriend to an art workshop, and then spending the next four hours just sitting on the corner trying to look busy. At least I don't have to feel very awkward the whole time. I'll get lunch. Non-paying participants can still get lunch at the restaurant, of course; you just have to pay for it. I'll get some pre-blogging done. Maybe I'll watch some television on my phone, although I didn't end up doing that. And then I'll relish in the fact that I am not a complete stranger, that I am not just hovering around waiting for my girlfriend to finish, that I am not just being a good boyfriend who secretly wants to get out of this small space as early as possible.

We arrive at the restaurant at fifteen past one. I initially sit with her, knowing I will have to leave because, well, you know.

"Dito," I reply. "Pero mamaya na. Kapag nag-start na kayo." Then I stare off to the other table, the one filled with giggling girls.

"Hello!" a slightly scratchy voice from my left says.

It's Reese, and she's crept up from behind me. I was that spaced out. So spaced out. I can reveal that I waved my hand at her direction without initially looking, and only then did I turn to her, said hi back, and exchanged what I will now call cheek kisses, because I still don't know what beso translates to exactly.

Rainy wanted to be in this workshop. It's partly because it's another art workshop, partly because it's from an artist she admires immensely. You know the story by now, I assume - the thing about Rainy telling me about Reese, me writing about her on earthings!, me ending up at her exhibit launch both because I wanted to do a gig review and I, surprisingly, actually like the nervous rush of meeting people you'd otherwise deem unreachable. Since then, I've pestered her on Twitter on an almost daily basis, which seemed to work, at least in the sense that I don't think she's annoyed by me, while I feel annoyed at myself for looking like I haven't got anything better to do. But, you know, blogger networking, I guess, even if that really isn't what I aimed to do. I guess.

Since Rainy is back in the night shift, it was up to me to reserve her slot at the workshop, deposit the payment at the bank (leading to the slightly surreal moment when the bank teller asks you for the actual name of the person you're depositing money to), emailing a scanned copy of the deposit slip. No, I am not the one going to the workshop. I'm only accompanying my girlfriend. And having lunch, one unfortunately riddled with onions. And trying to look busy, because the least I could do is to not look like I'm mooching off a collage artist's workshop.

Yes, I was pretty antsy.

But then you settle in and you get more comfortable. I've written a lot of words on my notebook and finished an initial list of songs for a month's worth of entries. I've had dessert, to boot. The participants - seventeen, I think, including a woman in her 50s who was invited by her daughter, and looks forward to doing collages in her prayer journal - have gotten busy with their works. You get the hang of things. You no longer feel antsy, because you now know your boundaries, and you can trust your head and heart to never cross them. But then, it's almost five o'clock. It's show and tell time.

I like giving feedback. It's not that I relish looking like a smart guy - okay, maybe I do, but I don't know. It's part of me. I can't help but speak up. So here I am, attempting to jump the line I have set for myself earlier. One of the women - I can't recall if it's the one in her 50s or the one in her 30s - shows a collage about her late father, a simple yet punchy one, and I found myself going "I like it" louder than I should. It happens a bunch of times, but oddly not when Rainy showed her collages. I think I went to "don't be too biased towards your hun" mode, which sucks, admittedly.

Yep, here we are again.

"Baka may question ka, Niko?" Reese gestures towards me.

"Umm," I begin, and half-flustered, asked about how far you can reappropriate an image without entangling yourself in potential trouble.

We definitely are here again.

I, surprisingly, actually like the nervous rush of meeting people you'd otherwise deem unreachable - people you don't know, people you admire, people you like - because the feeling of knowing you've actually reached them is, well, exhilarating. Maybe it's best I don't put it in terms evocative of water sports, but that's what I have right now, and I'm sticking to it. Yes, the discomfort is not fun, absolutely not fun. The thought that you're just making a fool of yourself is not fun. The thought that the other person is just being nice to you is horrifying. The thought that you will have to do that to someone someday, even more so. But breaking through is great. Sure, you're not done breaking through, but really, what's another wall?

By the end of the seminar I was a bit buzzy and I was running all over the place, lending the Ceremonial Dia Frampton Sharpie to strangers and even trying to help with the clean-up. Perhaps I was too buzzy. I felt invincible, or at least shameless. After all, I pretty much hovered around like a creeper for four hours. What else can't I do? Yeah, yeah, definitely shameless.

Reese and I got to talk a bit after the workshop, mostly revolving about the prospect of a solo record, and her mixing up Rainy's online and offline names. (No, we have not split up.) Oh, I wish things are as effortless as she makes it to be. The ability to get up and say "hey, look at me!" The ability to deal with the deluge of people that come in. The ability to say the right things to everyone. Or maybe it's me projecting my anxieties once again, about making a fool of myself whenever things like this come up. It always happens. You're not sure who's misreading what, if anything. But, perhaps, that's the thrilling part. Oddly.

All I really wanted was for Rainy to meet an artist she looks up to, though, and that happened, and then some. They did not shake hands. They did not have to.

By the way, it seemed people really liked Rainy's collages, or at least one of them. On the topic of her friends, she did something with cats and Japanese characters. I'm terrible at describing these things. I did first say I didn't feel much for it - so much for being a boyfriend - but it took a while for things to settle down, and I quite liked the whimsical feel.

Well, Reese certainly seemed to like it, and that definitely is a big deal, I'll say. I mean, I'm her boyfriend, but what's my opinion compared to hers? What do I know?
And your responses...