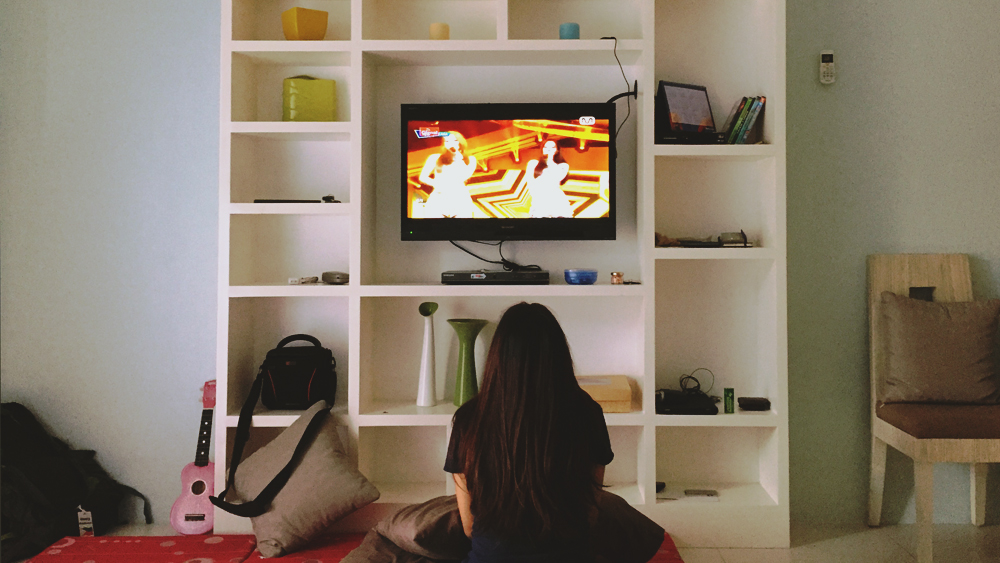 Rainy and I have been dating for two and a half years, and it took all that time to make us realize a couple of things. One, we are homebodies. Two, we'd rather just hang out somewhere, preferably at home, rather than go out.

But after two and a half years of dating, we both realize that we have a much better time when we're just hanging out somewhere, with no obligations to do something unusual or try something different. That "driving around in circles" thing was our Aguirre food crawl - her then-job, part-time job, thing - and she spent the weekend at my place, so she could quickly upload the photos and do the reviews and whatnot. At night she would sit in front of my laptop, fiddling with things, while I blabbed on about whatever came to my mind, and that turned out to be a lot of fun. Well, at least much more than sitting awkwardly in garbed-up chairs eating disappointing cupcakes.

We're both predisposed to that, it seems. She says she and her friends often just hung out at home, checking out what's online and joshing at each other. Me, I was never really the guy who'd go out on weekends - perhaps because nobody really invited me to do so in those "formative" years, but mostly, I think, because I just can't stand the idea of having to make impressions. You can't be yourself when you're out and about. You can't be yourself when your environment is keen to dictate what you should look like and how you should act.

"'Yan na naman suot mo," Rainy would tell me. Apparently I tend to wear the same top whenever we're going to Bonifacio High Street. It's either my blue Lacoste collared top, or my blue Giordano collared top. (She hates blue, by the way. Or at least a particular shade of blue.) She'd call it my "High Street uniform". I wouldn't even notice. But I guess I have this unspoken pressure to look hip and good when I'm there, even if all I end up doing is go to Fully Booked (at least when it used to be fun) and, maybe, try some cupcakes. But I wear the same outfits, which is completely at odds with looking hip and good, whatever that means.

At home, at least, there's absolutely no pressure. I'll wear what's comfortable and I don't have to worry about being stinky and sweaty, thanks to the need to walk around under the intense Manila heat. We'll just make fun of each other, and there's that. We'd watch stuff on television, and I'd cook up some stupid stuff for her, like this fried rice with bits of Doritos thing, which she surprisingly liked.

This weekend I invited her to join our family outing at Pico de Loro. You know, the usual. Rent a unit, hang out at the beach, that sort of thing. We stayed there for the whole long weekend, but we only went to the beach on Saturday morning. Well, there was the strong rain that afternoon, but when my folks decided to go kayaking, we decided to stay behind and just watch TV.

It was this week's edition of M Countdown, and we wanted to watch a whole episode just because we can.

I was, of course, initially skeptical about the whole K-pop thing. (How could you be a big fan of artists singing in a language you can't even speak?) But after two and a half years of my girlfriend relentlessly exposing me to it, I'm surprisingly familiar with some aspects. The management system, the promotional structure - teasers, comeback stages, goodbye stages - and the surprising fact that nobody earns much in the first few years. It also helped that she did prefer girl groups to boy groups; if she just fangirled to Siwon, I don't think I would be as receptive.

So, for the next stage of my now self-imposed education to K-pop, I watch a television chart show - a minor one, by all means, but still, a chart show - and figure out how the whole promotional structure thing goes together in real life.

But really, all we did was make fun of the performances and the stage design.

All we ended up doing was, well, point out who sang live and who didn't, and how better some performers were and how some weren't, and wondering why some of the graphics were so stupid. I mean, swirling bar chairs, really? And then there's that weird costume choice on Melody Day's comeback stage. We weren't sure if it's a wardrobe malfunction, so we watched it again, and no, it isn't. And then there's this bit.

The show that followed was this game show called I Can See Your Voice, where a singer has to figure out who among eight "singers" is a proper singer, and who is just pretending to be one, based solely on their looks. By now the family has returned - the beach closes at six in the evening - and they were also watching. Sure, there was my mother's leaning towards Korean formats lately, and the fact that there wasn't any good SEA Games match on, but there we were, my family of five, and my girlfriend, figuring out whether "tragic original YTC member" really is who she claimed to be. (The producers just made her up to look old.)

Park Jung Hyun eliminates another good singer, her third in a row.

I had the same thought for Hidden Singer, that variety show where the audience must determine who among a group of singers is the actual singer and not an impersonator. It would do well if ABS-CBN adapts it. But it would be awkward if, say, the audience decides Sarah Geronimo is not Sarah Geronimo, yes? If the audience decides that an impersonator of hers is better than the real deal? Yeah, perhaps too cruel for Filipino sensibilities - but quite entertaining, too, provided they don't edit like the Koreans, what with their love of the rewind button.

That sort of conversation happens more when we're just, you know, chilling somewhere, and not trying to be cool like the rest of them.

Sunday, we both fell sick. Inevitably. I had a cold and she had a cold, too. But Rainy tends to get really sick, and by the end of the day she was on the verge of a fever, or a flu, even. I decided to drive her home - drive her to Quezon City, and not just to the bus station. Besides, she was bringing a pretty big bag, and that's considering she left her ukulele at my place.

By the time we were at EDSA - I was needlessly amazed, because I thought Sunday night is a terrible night to be on EDSA, like, well, every night - we were well enough to go on a spontaneous dinner trip to Maginhawa. She lives near that hip food district, and also, she wanted to treat me to dinner. For once, she said.

"I look ridiculous," I said as I stepped out of the car. By then we had spent a good ten minutes looking for parking - an eternal struggle for anyone who frequents the street's occasionally pretentious restaurants - and we were heading to this street food park with a predilection for pop-up crafts stores. I was wearing a black shirt and bright orange board shorts; I wore the latter the whole day.

There were no pop-up stores, and the stuffed burger place she wanted us to try was already closed (yet another eternal struggle for anyone who frequents the street), so we ended up at this movie-themed chicken place called SPJ. It's actually off Magiting Street, otherwise known as the home of that nitrogen ice cream place that, apparently, always has a queue, even on a rainy day. Anyway, SPJ is this weird cross of Korean-style fried chicken and KFC side dishes, only their coleslaw and mashed potato is much better.

"May bits siya," Rainy, a mashed potato fan, pointed out.

"At least hindi siya instant," I replied, remembering my cousin's wedding reception at the Manila Polo Club. A very, very, very posh venue, a place where people who own horses come to see and be seen, had served me instant mashed potatoes. My future cousin-in-law even described it as similar in taste to the baby formula she gives her son. It's that bad. Or, at least, that disappointing.

I take a little bit of the mashed potato and, yes, it is not instant. It is good. And then I remembered the mashed potato I have made twice - skin on, large amounts of garlic - and I realized that I have yet to whip up a batch for Rainy. I make a note in my head. Soon, one of these days, I will. We do have all the time in the world, after all.
And your responses...