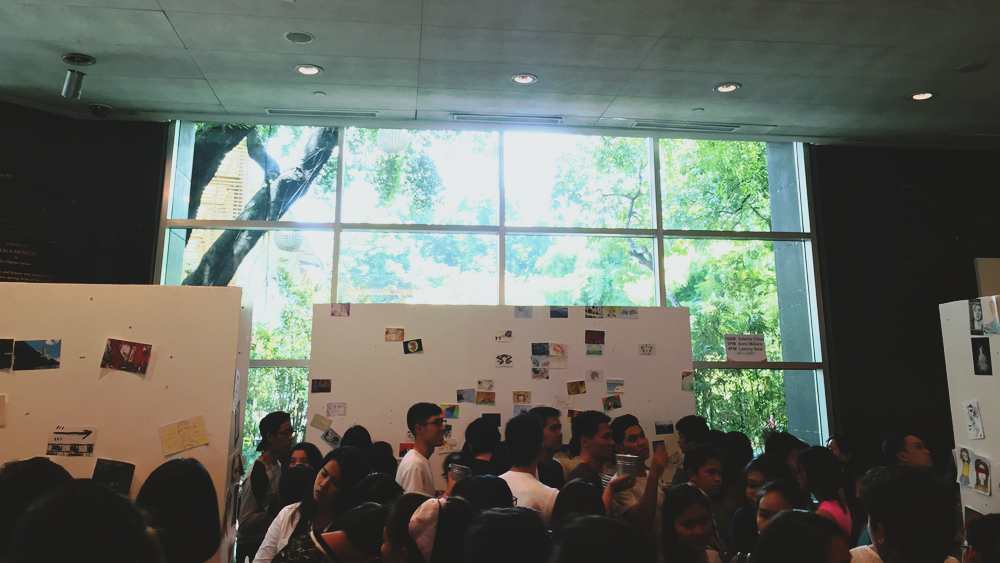 The throng was busy dropping their stubs into buckets that pop up from nowhere, before trying to reach up, or crouch down, or snag whatever they can snag. Off the side, standing by one of the tables, were Rainy and I, trying to look into the action.

"Come on!" I implored to a crowd that's obviously not listening. "Get that postcard!"

It was open museum day at the Ayala Museum, and there was a postcard exchange going on. Rainy submitted four postcards and got two - well, one was from me, because I was in line, too. Again, what a boyfriend-ly thing to do.

The collage workshop with Reese brought Rainy back to that artsy mindset. Here she is again, rediscovering her watercolors. She's buying art supplies, brushes and paints and paper. She's actually begun making notes, of concepts that she wants to paint. She's actually begun making prototypes, one of which was among the roughly one thousand postcards on the walls, being (arguably) fought over by the throng.

But she now has collage-making in her arsenal, too. She still has the old magazines from the workshop. She's buying stickers, cutting mats and X-Acto knives. She's figuring out how to cut those small dancers from Juilliard on the pages of Time Out New York. Two collages turned up as a result, and for some reason, she decided to give away the originals in the postcard exchange.

I saw someone take the first collage. She reached up for it; it was high up.

It's called Trauma; she asked me for a theme and thought of that because I saw a billboard for fresh chicken and thought, "how will she do a collage on the theme of fresh chicken?" The result, I say, objectively, is brilliant.

"Excuse me," I said, rush of pride going through me and obliterating whatever awkwardness had pent up in the hour and a half I had spent in the museum so far. "Can I take a photo of you with that postcard? My girlfriend made it."

Her name is Christy. Or Christie. Or Cristy. When you're talking to a stranger the first thing you do is not ask for how that name is spelled. That applies to baristas, mostly.

The second collage, the one with the Juilliard dancers, is called The Fight/Breakfast Club. It involves a big bowl of cereal sinking like the Titanic - or at least that's how I see it. (She had to do it that way, as the photo was off-page. Wait, I don't think that's what it's called.) The dancers were all going for it, prancing and skipping and diving, amputated arms and all (again, blame the page). It took a while for someone to take it. The throng was already there, just taking whatever they can get - surely the thought that the best ones have all been snapped up was going through their heads - and we were hovering on the fringes, keeping our eye on Rainy's three remaining postcards.

The prototype came down first.

"Hindi klaro na tinuhog sila," I whispered to Rainy. There's me, the non-artsy guy, giving feedback. I am possibly, in her words, being oppressive.

While we were talking, the sinking cereal-tanic came down. I feel terrible that, in the process of scanning the original, I smudged up the diving dancer's arms; the only good copy we have is, well, messed up.

What's left is one of her more traditional works, so to speak. I don't think it's got a name. It's definitely a watercolor piece, an orange hue all over. It's not a tribute to me, I can tell you that.

One last postcard, and the throng - wearing subtle patterns, or thick-rimmed glasses, or crop tops - is getting desperate. We were standing by the table, looking into the action.

"Come on! Get that postcard!"

Someone does pick up the postcard. It was glued to the boards with green glue gum, suspiciously the same color as Rainy's nails. I don't know who he or she is. The crowd, it's too thick for me to discern.

"May kumuha na!" Rainy tells me.

The postcard returns to the wall.

So this is how it feels, to watch your child not be picked by his peers to join their team. You're down to three kids. Another kid gets picked. You're down to two kids. You want to yell to those idiots. "Piliin ninyo anak ko, mga gago kayo!" You can't help yourself.

Well, in this case, I'm just dating a woman whose art will go places. I can't help but feel invested. Sometimes it feels your relationship relies on it.

Sometimes it feels your whole being is at stake. I don't know for certain. I'm no artist; I'm just a guy who attempts to sound intelligent by writing a bunch of words and making paragraphs out of them. She's pouring her heart out - even if she doesn't admit to it - on her art, and hoping someone notices and approves. All those postcards - it's the artist putting forward her best version of herself, a version, possibly idealized, that hopefully others will choose over what actually is there. Seeing that picked last must be crushing.

Or, well, that's my interpretation, one I was playing with as a woman picks the orange hazy girl postcard and decides to keep it.

Rainy got seven postcards, which is nice considering she only expected to get one, or maybe four. It wasn't clear at all how it would work until we were there. Anyway, she bought one postcard from a favorite illustrator who was a couple of floors up. She got four of them with the throng - we both had stuff to do in the afternoon and the stubs shouldn't go to waste.

I only got a close look at the first two postcards, though, the ones we got as part of the line. The one I got, by her request, was a postcard that, she correctly deduced, was from watercolor artist (and one she admires immensely) Valerie Chua. The one she got, because she clearly loved it, was an illustration from budding artist Erica Rielle.

Here I am, browsing the latter's blog, stuck for words. This, once again, is how it feels to barge into a group you're not meant to be a part of, more or less.
And your responses...