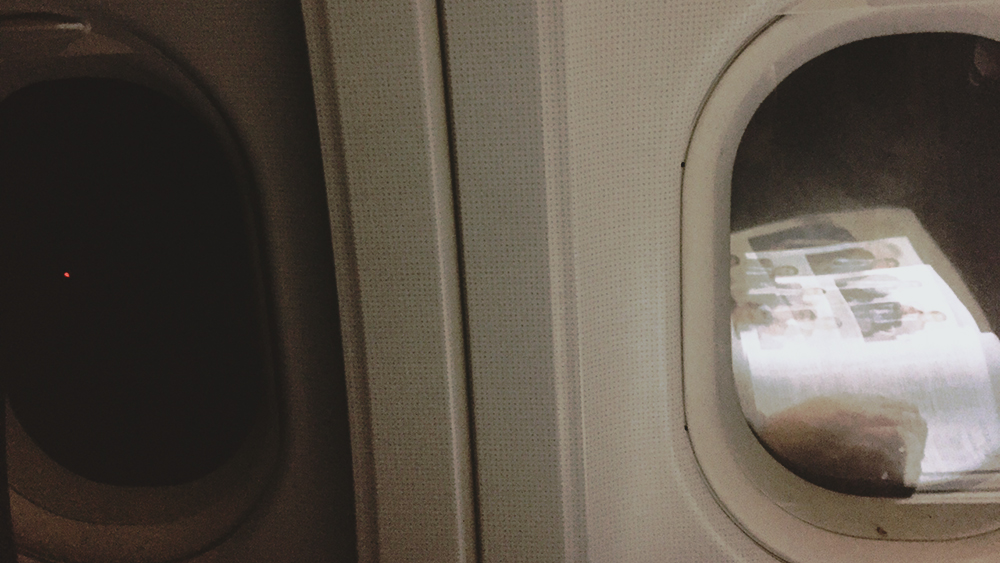 Last night I learned - or remembered - that I could never fall asleep on a moving vehicle, especially if it's a strange one.

I struggled to sleep when I went to Ilocos with Rainy. We were on a bus, us two, plus most of my colleagues from work. The bus left Manila at ten in the evening, aiming to get to the north when I wake up. But I didn't. I was awake the whole time. I was awake when the bus sped through NLEX, and SCTEX, and TPLEX.

Granted, I was trying to sleep. I actually had Rainy's eye mask on, and some soothing music in my ear, but no. I could not fall asleep. Well, I might have, but it was two hours at the most. I felt the bus rumble out of the last highway and towards Pangasinan proper. I felt the bus make a stopover at some rest stop made of nipa. The moment the bus got to Ilocos Sur, I was definitely awake.

Last April, I flew back to Manila from Taipei at around one in the morning. I couldn't sleep either, and this, despite doing my best not to take any caffeine in.

Last night I tried to get some sleep on my flight to Kuala Lumpur. It was supposed to leave Manila at five before nine; of course it was delayed, but only by thirty minutes. End result was still the same: the plane landed at past midnight. If I wanted to look presentable to the immigration officer, I should get some sleep.

Granted, I was trying to sleep. And for a moment, I thought I would. My eyes were getting heavy. The flight crew have turned down the lights. It was eerily quiet on the plane, save for a year-old girl on my row. She wasn't noisy, per se, but just wide awake, giggling, being cute, that sort of thing.

I returned to drafting a blog entry, something I began doing at four in the afternoon. I was at the airport seven hours before my flight, knowing the traffic could be terrible. (It was, but elsewhere. But you know Manila. Give it one bottleneck, and it gives you many in return.) Before I knew it, I had almost four thousand words. Was it the coffee? Yeah, it likely is the coffee. This isn't fun at all.

When I couldn't write any further, I decided to read. I bought the latest issue of Monocle for this trip, which meant my laptop bag was bulging. Reading lights on planes are a good thing, but it's too harsh. So I turned it off, and looked outside instead.

I had the apparent misfortune of getting a window seat. I've traveled enough to know I want an aisle seat, but I never really thought about it. The middle seat was empty, so I could lift the armrest up and spread my legs. The aisle seat was occupied by a Malaysian guy - I know this because he was reading a book in Malay, a book that costs RM 17. He had a neck pillow and an eye mask, and he was fast asleep.

Dammit, I need to go to the lavatory.

There's nothing to see outside. I can only see the wing, the engine, the red light on the tip that tells anyone on the ground that there's a plane up there, a plane filled with aliens who have yet to be let through by immigration. I can also see the sky, too. Faintly. I was above the clouds, and over there, somewhere, out there, there's a patch of orange. A faint glimpse of sunshine on some horizon. It is, perhaps, I assume, the closest I will get to Australia.

Cabin crew, prepare for landing, the pilot chimes, and suddenly, the lights went on, Everybody who was sleeping (and snoring) was woken up, save for the one guy in front of me. The little girl was crying, pressure wreaking havoc on her ears. Her mother, who was also awake the entire time, wasn't frazzled at all.

I worry about my return flight, which is at one in the morning.
And your responses...