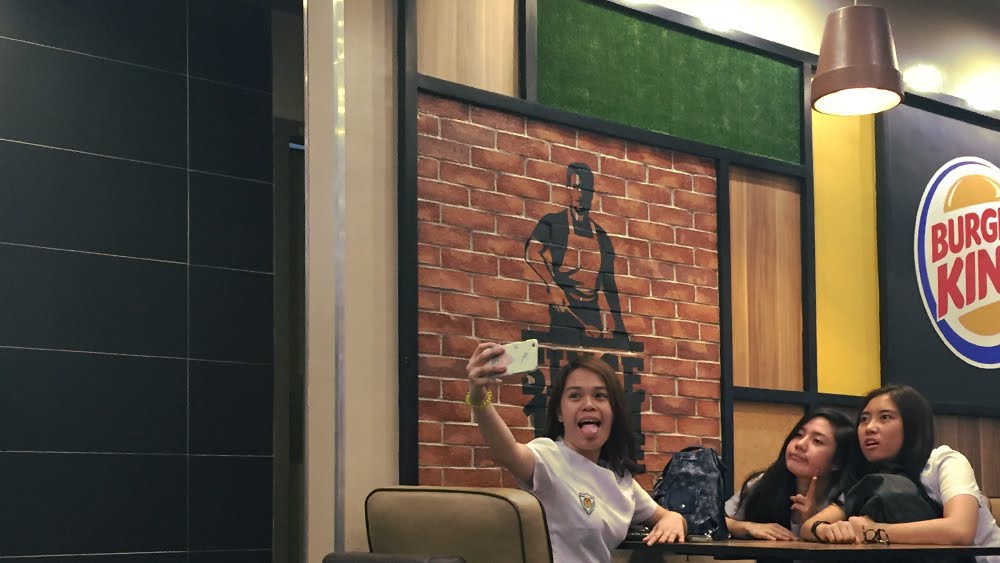 I am awkward with selfies.

I'm not saying I don't do selfies. I don't have too many of them, though. Thankfully, perhaps. It's not because I find my face awkward; I've long accepted that I will never see myself as someone who looks good, because familiarity breeds contempt, and I have been living with this face for almost 27 years.

No, it's actually because the process of taking a selfie is, at least to me, just so cumbersome.

I realized this when I first met Zaty. I needed to show Rainy some proof that we did meet (and that the care package got sent) so, after I watched her drink coffee, we took a selfie.

One, I stupidly didn't use my mobile phone. Of course, most phones now have front cameras, and in the case of my iPhone, it has a pretty good front camera. I instead pulled out a point-and-shoot digital camera and attempted to take a selfie without knowing whether both of us are in frame. To make it worse, my hands were shaking for some reason, so we had a blurry photo.

Two, I am taller than most. This problem is most evident when I am with Rainy. Now, we don't always take selfies - I'm always taking photos of her, at her request - but yesterday we somehow wore matching shirts. (She would say I changed my top, ditching a light brown polo for a maroon collared shirt, so we'd wear the same color. I really just think it looks good on me, and it fits well, too.) So, well, there's a reason to take a photo of us.

But, again, I'm taller than most. I'm five-foot-eleven and she's five-foot-flat, and that makes for an awkward composition. Or maybe I'm just overthinking this. Selfies, you know, you're not really supposed to think about it, right? Unless you're doing it solo and have a lot of supposedly inspirational quotes at your disposal.

Okay. Fine. Perhaps it is the awkwardness of the mere idea of taking a photo of yourself. You know, positioning yourself in the middle of something - action, perhaps, or scenery - and, to show that you were there, you take your phone out, switch to the front cam, point it at yourself, fiddle with the frame, and press the shutter. In an instant, you are Neil Armstrong and you have planted the American flag on the moon. Or was it Buzz Aldrin? Neil was the one holding the camera, right? Would he have taken a selfie?

I don't know. I don't really know. I'm not bent on pushing my likeness on everyone, at least not instantly. Arguably, that's why I write. You can't call me a hypocrite in this case. Why am I being extremely defensive? What do you mean I have no basis? Yes, I have selfies. A bunch of them. I have included some here, even. Why am I being defensive? Someone help me, please?

I realized, or maybe remembered, a few things while typing this essay of sorts down. One, I am not really the kind of guy who takes a photo of himself at random times. I did this a few times - in college, even, back when the term "selfie" didn't exist - and I find it disconcerting. You're not sure if you're doing it right, so you adjust your camera for a while, tilting it up and down, cocking it in a particular direction, praying that you don't drop your phone after all the fiddling. That leaves me with selfies with other people, whatever people in marketing are bent on calling that, which leads me to my second point: I feel extremely awkward when I ask others if I could take a selfie with them.

I had a quick meet-up with Icka last week. She was in Ortigas, and she finally got around to giving me the two Popin' Cookin' sets she bought in Tokyo - one for me, and one for Rainy. (Frankly, though, both will go to her.) There was the usual conversation about blockmates - now focusing on who got married, and why Sunday lunchtime is the best time for a block reunion - and there was her mother, who I first met almost ten years prior, insisting that I finish the churros they bought. ("I don't double dip," she said. "It's okay. Get it.")

But before all that, Icka asked me if we could have a selfie. I don't know. Documentation, I guess? Two friends who have known each other for ten years meet after a while. A lot has changed since the first time they met, but they can still carry conversations without being awkward. It's an achievement, arguably. So, sure, I said, let's have a selfie. A photo of me! With someone else! If you've known me for ten years or more, you would know that I like photos of me with other people. You would also know that the struggle is real. I know what I want, but asking for it is incredibly awkward for me.

We had a selfie, and I was almost late for work.

Rainy was the one who asked for a selfie. It's a no-brainer. I would say yes. But I don't think I have ever asked her for a selfie with me. Well, perhaps except for that one time three years ago, when we first started meeting and a romantic entanglement is far from our heads. So, we took that photo in the middle of a mall's outdoor hallway, and then, once we had the shots, we headed out to some discreet office building across the street, to have some custom-assembled ice cream, hand-torched cookie sandwiches, and first dibs on an album before most of the world.

And then we took more selfies.

I was talking to Reese afterwards. That was her album we had first dibs on; the invite to her pre-launch listening party came after, I guess, a year of semi-pestering, most of which I have done in recent weeks. (Obligatory side note: the album launch happens on Sunday at Green Sun. There's ice cream and cookie sandwiches and a lot of performances.) That's why I was talking to her, actually. I took a photo of her and Rainy, somehow deciding along the way that I wouldn't have a photo with her because we already had one before. Then we waited for the crowd to somewhat thin out, then I talked to her, or pestered her. Then, for some reason, I asked her one more thing.

Once again, I turned on my front cam, and fumbled with the composition, because I was taller than her. 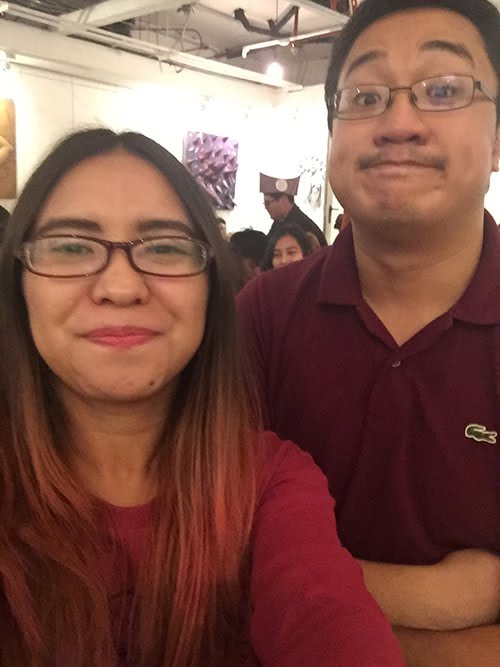 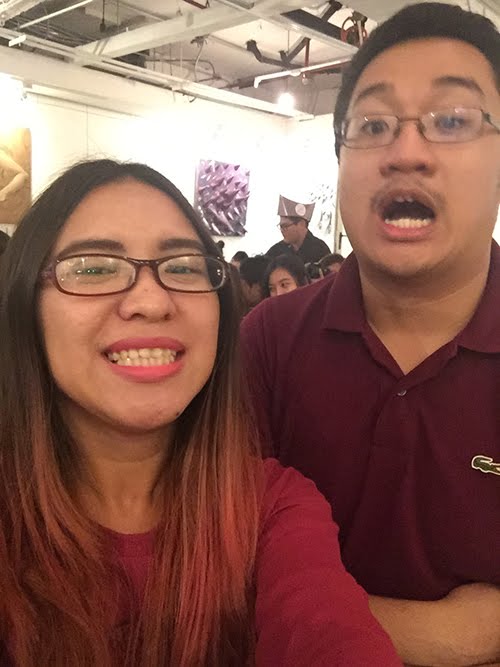 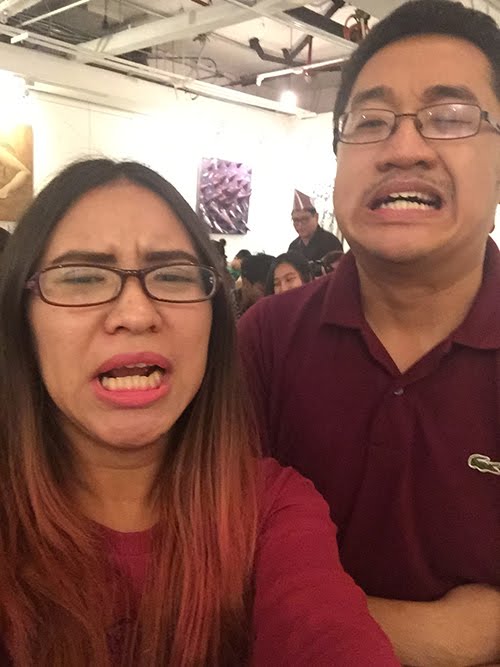 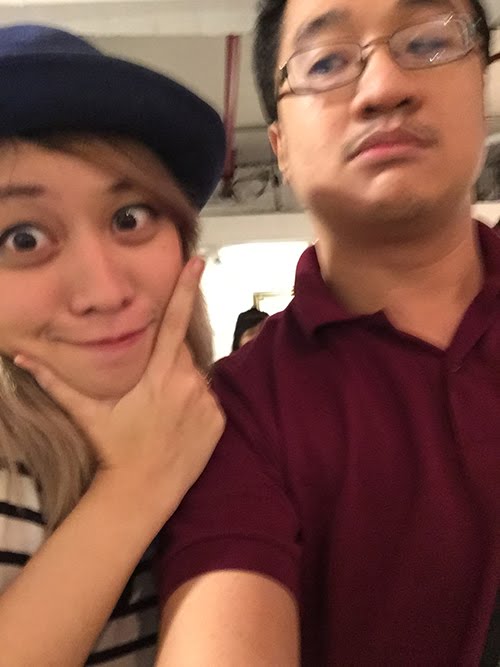 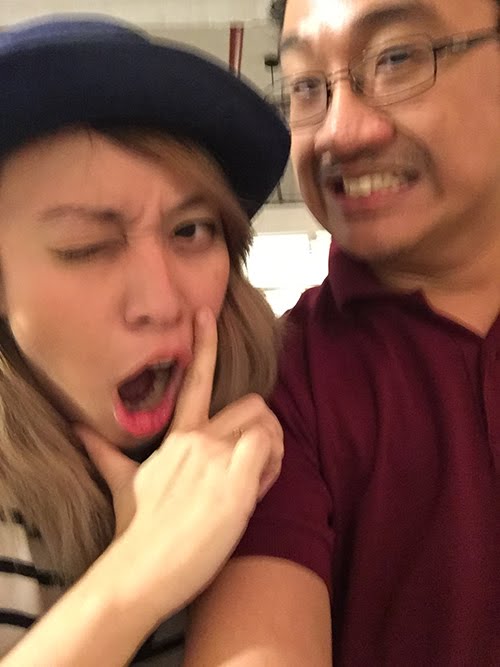 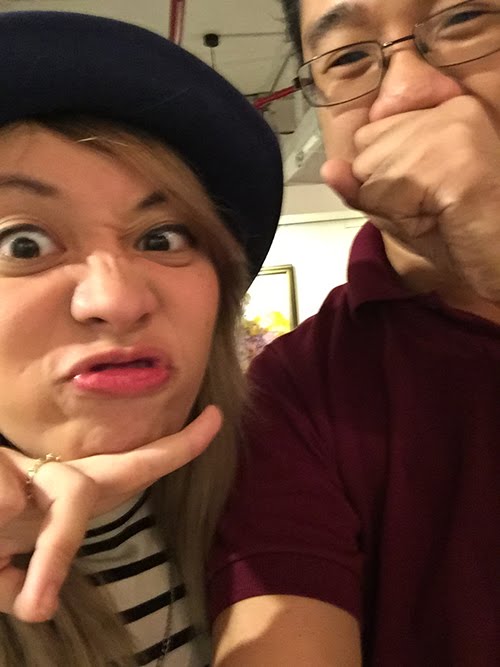