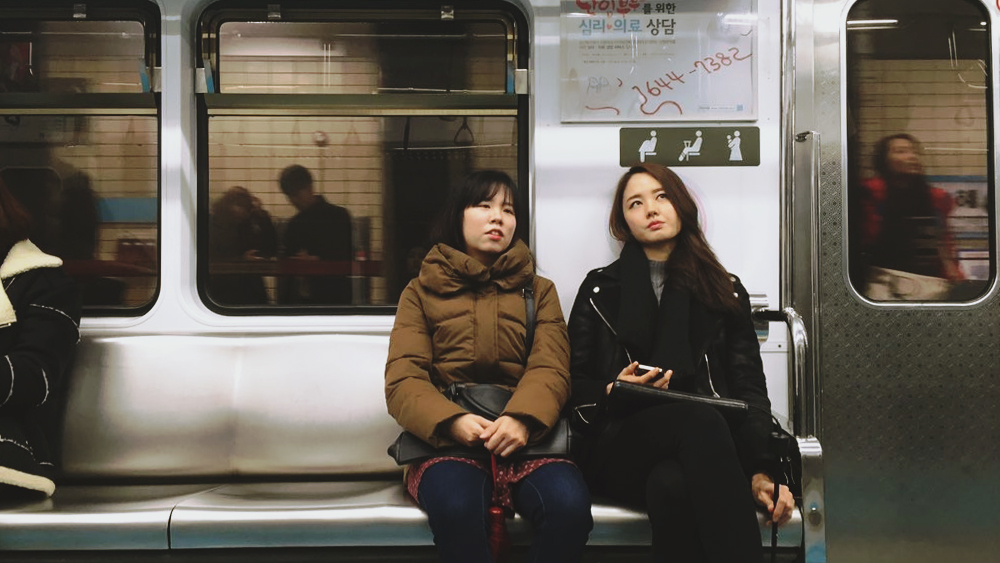 You get used to the cold. It was below freezing the entirety of Sunday, and for most of Monday. We survived, for the most part, but all the walking on Monday - Rainy and I were looking for an art supply store that was particularly hard to find - got me tired and pretty susceptible to chills. I had the thought of writing an essay titled "The cold never bothered me anyway" but, well, scrap that.

Experiencing snow, on the other hand, is something else entirely. It does look like ice flakes going down on you. Well, granted, when it did snow - Rainy and I were at Nowon, meeting up with one of her aunts who works there, and has since married and had a daughter - the forecast called for both snow and rain, so it could have been that. The winters this year have been warmer than usual, the locals say, so the snow came in less frequently, and less thinly. Also, I couldn't zoom in on the flakes to see those patterns. But it was an excuse to get rained on without looking soggy. We just stood there, at the pavement, getting wet, but not really. And then I brought out the umbrella and realized it wouldn't open.

It does smell of kimchi and ginseng. But only in particular times of the day, and in particular days, and mostly on the subway system, and only if you know how both smell like. You would if you've been on a city tour and was forcibly brought to one of those places that sell ginseng food supplements.

Trash bins are hard to find. I always have that struggle: I have a box of chocolate milk that I just emptied, and I don't have anywhere to throw it in. And yet, for the most part, Seoul is clean. Not as spotless as Singapore, sure, but not as messy as Manila is. (The closest I have seen to messy as the "dating stairs" near Ehwa Womans University, which is littered with leftovers from, I dunno, dating couples the night before.) There are recycling bins, but they're not as widely-seen. Or they're cleverly disguised.

You can survive on Korean street food alone. It probably isn't worth doing all the time, but if you're on a rush, there will always be a stall that sells something that you'll like. Rainy and I are in love with the hotteok - essentially deep-fried pancakes, filled with a mixture of brown sugar, cinnamon and sesame seeds that melt once thrown into the oil. We've had one every day since we discovered it. Obviously Koreans love their tteok, or rice cakes, judging from its ubiquity, but they also seem to like their fried dough. And their fish-shaped breads filled with red beans. And, well, think of corn dogs, only with potatoes instead of cornmeal. We have yet to try those.

Silkworms taste like peanuts. I had a cup somewhere at the Namdaemun Market. It was just for 2,000 won. I did not expect it to be filled to the brim. I didn't finish it, not because I felt queasy - you do quickly get past the fact that they're worms, and then they start tasting like boiled peanuts without the crunch - but because I wasn't sure I could finish the whole thing. Turns out it's a good thing, because after settling for a proper lunch and getting a suggestion from Rainy that maybe I should pop one of her antihistamines - I also learned that I am allergic to silkworms.

Make-up and food almost cost the same. And they're everywhere. There's a Nature Republic store in every Metro station I was in. An intersection in the Nowon neighborhood had six of them. Everywhere you look. you see women with so-called "dewy face" - supposedly to make them look young - and almost perfect skin. You'd realize you have the same look in Manila, but it's called "sweaty" and it's never a good thing. So, to prepare for that, I ended up, um, buying, um, BB cream. For men. Two bottles for just 16,000 won. I got chatty with the lady at the Skin Food branch at Dongdaemun - Selena's her name, or is it spelled Selina? - who approached me as I looked at the wares, and I ended up with a bunch more samples of things I now suddenly have to use.

All of those make-up stores play K-pop. In fact, K-pop is everywhere. I actually thought it's just us foreigners making a big deal out of it., but K-pop is everywhere. It may not be all the radio stations play, but it's all the stores play, and it's all the stalls play, and there are four shelves' worth of them on the one record store I went into. (Perhaps it's because those boxes contain CDs and photobooks and, in the case of my copy of IU's Chat-Shire, a map to, well, Chat-Shire. One CD I saw was in this huge, heavy box; I don't even know what's inside of it. Also, those albums only cost roughly P800. And you don't feel cheated. But that's a long digression.) Hearing a Western song - a random Death Cab for Cutie track here, a random Justin Bieber track there - is so rare, you can count them with your fingers. I actually think if you don't like K-pop, you'll at least appreciate it once you leave Seoul... unless, of course, you have earphones on all throughout.

Miss A's Suzy is the most ubiquitous face around. She's, like, the Kris Aquino of South Korea, but with more talent, one could argue. Lots of endorsements for lots of things. Every supermarkets has shelves with her face on it. But, well, I like Hyeri's from Girl's Day better. But, well, I like Nana's from After School the most. She doesn't endorse anything, but, you know, I guess, it's a good thing.

Koreans strive to be the best in everything they do. That, perhaps conveniently, explains why their pop music is a force to be reckoned with; why their mobile phones are not just throwaways; why their conglomerates have their fingers on everything from telecommunications to electronics to life insurance. We Filipinos, on the other hand, settle for the bare minimum. But that's another essay.
And your responses...