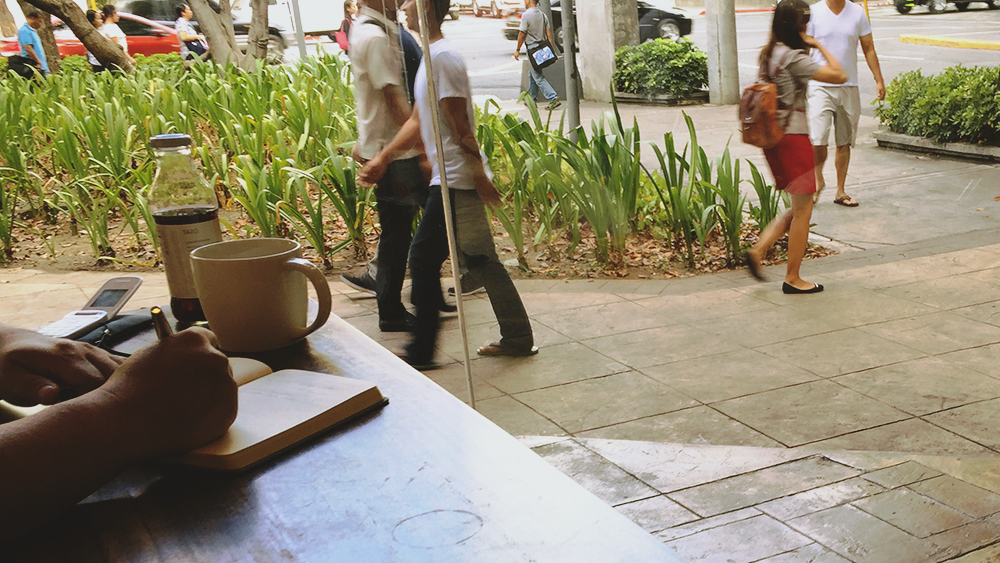 I'm spending another morning at a coffee shop in Makati.

I'm wearing a suit, but not a tie, not yet; I know better than to wear it the moment I get on the car the drive. Hotels, after all, have restrooms where you can make yourself look better.

I'm drinking coffee, but - perhaps a nod to the fact that I'm just 27, or to the fact that I don't always go to hotels wearing a suit and tie - it's a Starbucks frappucino. If I really wanted to look the part, I would order a flat white, but, honestly, I don't know where one gets those. I'm not that guy who knows the best place for this and that by instinct.

I'm reading a magazine. Monocle, inevitably, because I really have to finish the thing, and only now do I have time to kill where I'm not distracted by a screen. I'm reading a short essay on the Turkish denim industry. I'm thinking whether the Philippines will ever find an industrial niche for itself, however hipster it may be.

I feel good about myself. I feel good about this game of dress-up I'm doing. An expensive game, surely. Then again, maybe we should not call it a game. I'm not in this coffee shop just to look like I'm a guy who powers the country's industries. I'm actually attending an event, and that event calls for a suit and tie. I could have chosen not to go with a suit, but I'm in a hotel, and hotels can be cold, and even if I don't shiver easily, I can never be sure when I do. I could have chosen to take public transportation, but, really, in Manila? I'd need another shower before I can look presentable again.

So, here I am, then, sipping an ice blended drink out of a straw, seated at a bar in a coffee shop, wearing a suit but not a tie, reading a purportedly well-crafted magazine, basking in the fact that the people around me are probably thinking I'm a guy who powers the country's industries. As a knock-on effect, of course. A knock-on effect, not the deliberate outcome.

The guy beside me ordered a bottle of fruit tea. He's pouring it into a mug. He's drinking off the mug. He has a notebook and a fountain pen. He pauses to ponder, and then he writes on the notebook. The ink isn't black, but I can tell he has what one might call exquisite handwriting.

I should get a pen, I think.

I lost my pen somewhere yesterday. Must have slipped out of my pocket while I was running erands. I've used the same kind of pen for the past ten years: a Pilot retractable pen, black, with a rubber grip. I bought it for the first time at the bookstore inside La Salle's SPS building. I liked how it felt, liked how it wrote more, and I've used it ever since. "Isang Pilot na black, retractable," I'd always ask at the bookstore.

But maybe I need a more, err, presentable pen. Nothing wrong with my favorite pen, no, but it looks chunky and, well, very student-like. Maybe I should have one of those shiny pens. Not necessarily a fountain pen, but at least a pen that would make people pause for a microsecond and go "oooh!" once I pull it out.

I had one of those, actually, but it slipped out of my pocket. It was a gift, but still. Or, it was a gift, so double yikes.

I should also get a leather bag.

I've been thinking about this for a week now, to be honest. I only have two bags I regularly use for work. I have a laptop bag I bought at a rowdy sale in Hong Kong. It's functional, and it has that thing and allows me to hang the bag on my luggage whenever I travel, but it's also bulky. My other bag is a messenger bag my parents bought me when I graduated from college and started my first job. It worked fine in those early years, and it still works fine today, but now that I find myself attending business-y events, a bag with a skull printed on it just won't do. Wouldn't it be nice if I had a leather bag - or, maybe not leather, it doesn't have to be leather, just something made of a material that looks presentable and classy - that could contain my documents and, maybe, my laptop, and, maybe, that copy of Monocle I have to finish?

It is a game of dress-up, an elaborate game of dress-up. It all clicked into place when my mother remarked that I like to buy branded things. Sure, it sounds pretentious. Sure, it is pretentious. Here I am, constantly rattling against people who like to show off what they have, and here I am, doing the same thing. But I'm that guy who likes to feel comfortable about being in situations he is not made for. It's why I can say, with conviction, that I write about supply chain when all I write about is the need for better urban planning. It's why I can type this blog entry out at a hotel ballroom, surrounded by actual people of industry, without looking like I'm just a writer who's not seated in the press area.

I'm 27 years old. People my age now have job titles that have "regional" or "manager" somewhere in it. They earn twice as much as I do. They can afford to take many breaks and live the life, so to speak - and in a world where so-called living the so-called life is important, well, that counts for something. They know, by instinct, where the best flat whites are, and where the most quiet beach is. And here I am, wondering why instant coffee isn't good enough anymore.

Maybe it's the things I read, from my social media feeds and my magazine collection. For a while I'll see my friends and realize that we who live normally, so to speak, are still a majority. Then again, I'm both insecure and aspirational.
And your responses...