And that's where the problem lies.

It's not that I don't want to send a photo of me. There's no turning back on that now. All my past jobs involved posting a photo of myself online. Heck, I did that before I got a job. I guess I'm also narcissistic - why else would I maintain a blog for eleven years?

It's not that I don't like those "a la blogger" photos, either. Despite the apparent rigidity of the aesthetic - clean background, preferably off-white; soft lighting, or Rainy-esque filters that make everything look muted; a seemingly impeccably-picked wardrobe - I actually see the value in it. Well, if only because it gets you a good photo you can use to identify yourself, whether that be one of those typical influencer-y headshots, or one of those brooding, artsy-farsty ones.

I have my own preferences. I like busy urban backgrounds - neon lights, supermarket shelves, pedestrians crossing, if possible. And I do have photos like that. But I don't think I want to submit that photo of me in complete business attire - suit, tie, the works - in Hong Kong that matches that exact look I like.

The problem is, simply, I have a few photos of me.

I was in Cagayan de Oro two weekends back for an event, and one of my tasks was to take photographs. That included that one big class photo, so to speak, with all the delegates and speakers, up the stage.

It's one of the risks of the job - and one of the risks of my very nature. It's safe to say I always liked documenting things. Again, I would not maintain a blog for eleven years if not for that. I would not have misplaced dreams of being a journalist. But most of the time, I would be the one with the camera - often a phone; sometimes a real one - and I'd be snapping to my heart's delight: a set of neon lights here, a bunch of supermarket shelves there.

People would then intervene. "Ikaw naman!" they'd say, and I'd pose for the camera, glumly. All I have is a tourist-y shot, and I am looking glum, because I do not know how to smile.

Okay, there are good photos of me, but they are old, and I don't have the original files anymore. My Twitter profile photo is from nine years ago. I think Mae took it, when we were both in college, when we were all required to attend one of those gatherings around some figure in the news; in that case, it was Jun Lozada, government whistleblower. My Last.fm profile photo is also from nine years ago, from television production class, when I was the floor director. They look good, but they're old. Granted, my face hasn't changed a lot - else I wouldn't be using them - but still.

With the new Strokes EP in the background I began looking for a photo of myself. There must be some good ones lying on my archives. I have been to a lot of places, after all, and while I have a few photos of myself, I am bound to know when and where I do have them.

I don't have any in Taiwan. Well, I have two, but one is an awkward selfie I took at the Ximen district - I say awkward because I used a DSLR. The other is a photo with Jackie, at the same spot a couple of days later; we had a local take the photo. The background is busy, but, you know, it's not, err, blogger-y, I guess.

I have this one photo from Seoul. I think Shalla took it. We were at the Gyeongbokgung Palace. It was our first day in the South Korean capital; we arrived the night before. It was below freezing. The lows were at nine under zero. I was in full on winter garb. Well, I must have been a bit excited for that. I have never worn winter clothes before. Typical. I live in a tropical country and I am not as rich as most of my college friends.

The photo is, well, okay. It's good enough that I actually use it as my profile photo over on earthings! But winter garb... you know, I really should have more photos of me in Seoul, now I think of it. But I look glum in my solos.

Blogger events? Sure, why not? Yes, I don't like being called a blogger, with the connotations that I'm only in it for the free stuff. When my pretentious streak shows - often, I'll admit now - I call myself "a writer with a blog". But, fine, blogger events. I've been to a couple. More, if you expand the definition to "events I went to with the intention of writing about it". I always go with Shalla, so I don't feel awkward. Somehow she ends up feeling awkward herself. I feel awkward as a result. Anyway, end result is, there are photos of us, but no photos of me.

You know, it would be nice if there are photos of me doing, well, blogger-y stuff. Sometimes I wish somebody took a photo of me interviewing Up Dharma Down. That was a proud moment: I somehow managed to get a one-on-four, not a four-on-four like the other bloggers ended up doing. (See. To hell with protocol.) It's unlikely there's a photo of me listening to Reese Lansangan's album at her TayTay-inspired listening party, or a photo of me taking photos at her album launch a week later. Would be nice, yes? A photo of me doing things, looking busy.

Instead, all I find, amidst the photos of singers jotting notes and supermarket shelves with Korean products and posters of the very ubiquitous Bae Su-ji, are photos of her, and photos of us - of me and Shalla. And none looking glum, unless we do it deliberately, like we always do.

I have no complaints. 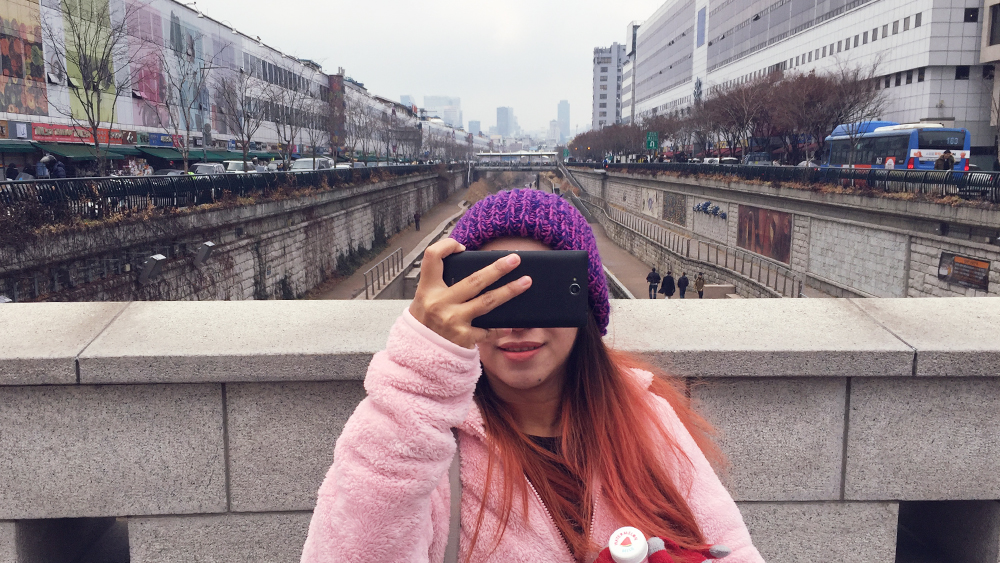