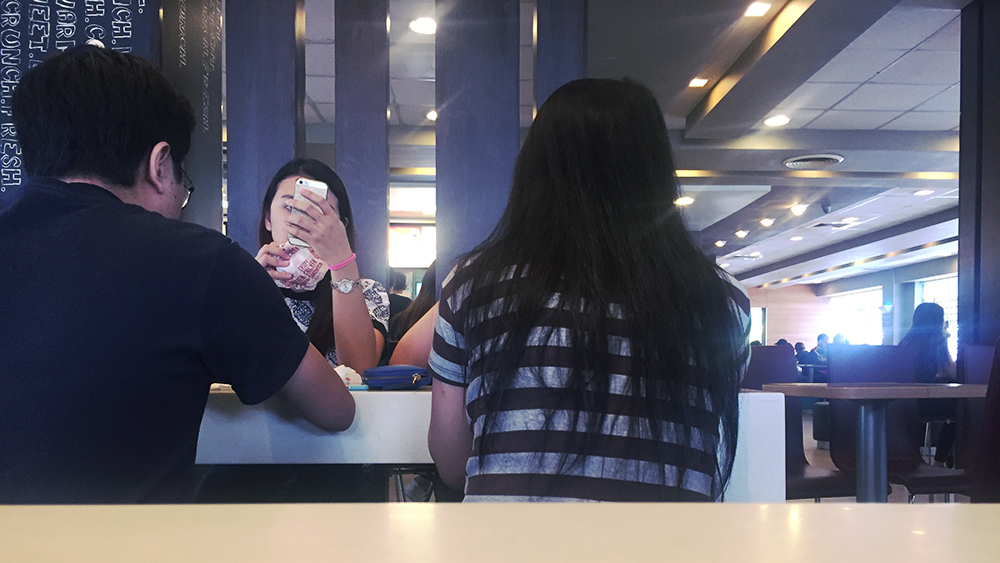 I did not need to eat, but I felt I had to. What else do I do? Sit around this McDonald's not buying anything?

I didn't really frequent this place. The logic was, there would always be a lot of people here, mostly freshmen who didn't know any better at the time. I only remember three times distinctly.

The first was when I was one of those freshmen. Frosh, we called ourselves. It was a Saturday, and I was taking part in a tour of the ABS-CBN studios. The van has arrived, and we're all going to leave, but one person in our group isn't with us. I don't remember how, but somehow I volunteered to go to McDonald's to tell that person that we're leaving. I don't know. Maybe it's because I was this feeble kid who found some of his eventual classmates intimidating. Maybe I decided to challenge myself.

I remember feeling good about it, because that person thanked me for being "so thoughtful". Her words. It never came up a few years later, when that girl - Yas, you all remember Yas, right? - drove our thesis team deep into Cavite to scout for shooting locations.

The second was on a weekday. I was still a freshman; I still felt really awkward around my classmates. It was one of those rare times when I had lunch with a group of them. That happened so rarely that I can pick out most of those times: that one time at the stairs of the Sports Complex where the BonoSoc gave me a cake; that one time at Shakey's during course card distribution day, also with the BonoSoc; and this, with a group of blockmates, those who never fit in any of the cliques that formed in the first two terms. I remember Kevin and Icka and Ian there. I remember being satisfied that I have found a group of friends I can always have lunch with. Shows how little I know.

The third was a Saturday night, which meant the restaurant was emptier than usual. Jaja and I came from watching a PETA play, and we took a cab back to La Salle. We picked up some food before parting ways - her on a condominium unit she's renting nearby, or something; me, on a bus going back to my home that's far away from most, the excuse I always flag up whenever I say I can't always hang out after classes. I live far away. It's hard to get home late at night.

Of course, a lot of things have changed since then. Not least this McDonald's I'm in - the students didn't like it because it's old - looks old - and did not have a McCafé. How come the one at the Ateneo has a McCafé? Why can't we have good things? There was a petition on Facebook before these things became ubiquitous. Of course, nothing happened, but a branch's lifespan means metamorphosis will come sooner than later. Now there is a McCafé, and there are no ceramic tiles on the floor, just like all the other branches I've been in. I miss how out of time it felt.

The crowd, of course, does not change. The people are different, but the stereotypes are the same. There are students fresh from PE, still wearing their uniforms, the smell of sweat a little harder to get off now. There are students fresh from business presentations, still wearing their coat and tie, or maybe just that first bit, since they can breathe easy now. There are students with outrageously dyed hair, smoking an outrageous amount of cigarettes. The only thing I've noticed that wasn't there before were the deaf students from CSB - sign language, of course, they were using sign language.

But everything else has. This does not come as a shock to me. My siblings also went to La Salle; my brother just graduated last year. For ten years, stop and go, we had a view to the changes along that stretch of Taft Avenue. Parking lots become fast food branches; old buildings become condominium buildings; buses are banned, and then unbanned. But in the eight years since I graduated, all of those details were just stories. Now, here I am, walking to a Fully Booked that definitely did not exist before. There are still crossing guards, but there are now traffic lights as well. The conservatory has gone completely. It's weird seeing a patch of green where glass used to be. These were just stories, and now they are first-hand observations.

I was there for a meeting at the Faculty Center. It still smells like the library I once frequently haunted. "This used to be the magazines section," I told my colleague, who studied at UP. "This whole place used to be the library, but now they moved it to the new building where the football field used to be. It has bean bags now."

I felt a tinge of disappointment when I learned - or relearned, I don't remember anymore - that the Communications department, the place where we all staked our hopes, is no longer where it used to be, at the second floor of the Miguel building. It's now a testing center for psychology students. The rest is still filled with rooms only we CAM majors would use, though. The signs are still everywhere, and so are the class listings. On Tuesdays there is photography class. Jaja is teaching that class this term.

It was recruitment week, but with the new Henry Sy building bulldozing the old basketball courts by SJ Walk, the chaos was now mostly at the Yuchengco lobby. (I remember Eena giving away postcards while playing a French mime. I wonder how she is now.) It now has, oddly, a Power Mac Center branch. I never understood what that is for.

The Central Plaza lost more than half of its roof.

The old Z2 now looks way too lounge-y for a canteen.

I said I missed the out of time feeling that McDonald's branch brought me, but this - I don't want to be the one out of time.

I expected that to happen. I've been seeing that everywhere with my own two eyes. They say the world is for the young, and more so now than ever before, it is. We all seem to work towards appeasing that generation of people who think "being an adult" is such a challenge that they need to infantilize it before even touching it with a ten-foot pole, or whatever their equivalent of it is. (Quirky illustrations on Instagram?) Every sign has to be hand-lettered, but only by so-called artisans, not those men who painted film billboards back when I was a little boy. I see that and I feel out of time. It stings more here, because this was my old stomping grounds. Everything is familiar, and yet everything has changed.
And your responses...