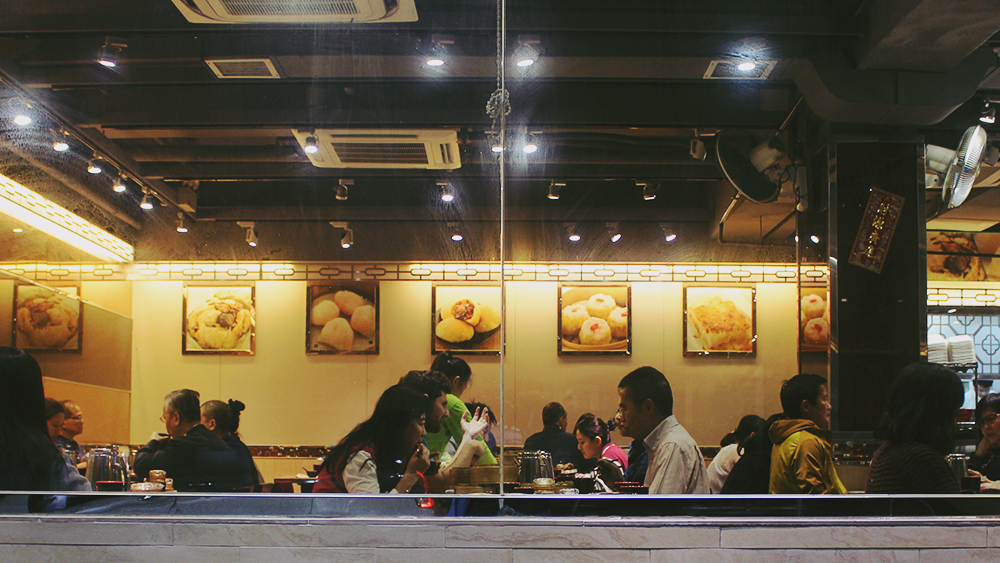 We were walking on a sidewalk somewhere outside Hong Kong's city center. We weren't that far. There were still trains, and there were still trams, at least a short walk towards the main road. Perhaps my unfamiliarity with the area meant it all felt residential to me. Somewhat. I'm still on the island, and it still sounds a bit frantic from the distance.

As it turns out, we have passed by a couple of Filipinas, assuming ones working there. I won't assume what jobs they are, though. The point is, we passed by two, and right after that we passed at least two more. And just before that, we walked past a grocery that turned out to be filled with food items manufactured in the Philippines, which surprised both of us.

We were on our way to, well, Tim Ho Wan. My sister has not been there, and I thought it'd be a good idea to bring her there - to one of the actual Michelin-starred places. "I assume mga two hundred Hong Kong dollars ito," I tell her, allowing us to break the budget for this, somewhat.

We took our seats, and one of the ladies nonchalantly pulled out the menu in English. Perhaps it's just me, but I felt a hint of exasperation in her face. "Not another tourist," it seemed to say. But let's just say it's nonchalance.

There were tourists beside us. This is a Michelin-starred place after all. This is the sort of place tourists put in their lists, ticked a few days later. We tried to figure out what nationality they were, an attempt hindered by the fact that they spoke English.

"The pork buns are so, so good," the only female among the three tourists said.

The lady who nonchalantly look my order returned to me and, still nonchalantly, pointed at my placemat. "This, not available," she said, pointing at the glutinous rice rolls we were now not going to have for dinner.

Of course, we had the pork buns. They were the first to arrive. They were softer and more buttery than I remember it back in Manila. I say this like it's where it all began, but that's really the only gateway we have to the world's best restaurants, or at least those who have international ambitions. Shalla and I were there after a morning spent at a wake. Pagpag, as we Filipinos call it: shaking off the spirits of the dead by not going straight home.

We're not sure if it has affected our meal, but I remember enough to tell my sister to avoid the steamed beef balls, because she won't like the texture. (It's a rare example of me not liking the texture.) Also, get the steamed egg cake. Good call, as expected.

I have been to Tim Ho Wan, but this was something new for me too. Shalla's seafood allergy meant even I can't eat the shrimp dumplings. I'm not sure if there's any seafood in the "chiu chow style" dumplings, but I liked those, too. But those have peanuts, and Shalla is allergic to that, too.

Another set of tourists came in, sitting on the same row of tables as me, my sister, and those three assumed Aussies.

"Are you being racist?" my sister joked.

But maybe not. Maybe he just looks a bit like the actor I had in mind, the actor whose name I don't even remember. But then, I have a reason for that. "I don't watch Parks and Recreation," I merely offered.

Another couple heads towards our row of tables. They're not separated like you'd imagine a restaurant would. Like a cafeteria? Our row now has four different set of diners. My sister and I are now sitting beside a local couple, a clear mismatch, at least sartorially, as the guy was wearing a suit and tie. Maybe he came from work. He looked gawky.

"Akala ko kung anong ritwal," I said. Like that word vomit, I was wondering what really was up. Now I know I may have sounded culturally insensitive, but it did seem unusual at the time.

"I hope it's not health-related," my sister offered.

Were our cups too dirty? Was he just being clean? Did I do something really wrong? What do I know? I am in a foreign country, a place where restaurant staff, perhaps, assumingly, hesitantly, slightly, take the English menu for the benefit of fools like me.

Our meal cost just a hundred Hong Kong dollars. A hundred and twenty if you count the bottled water, which we had to buy because my sister had medicine to take. I thought I'd bring it back to the hotel.

In line at the cashier, I thought I heard another Filipina.

On our way back to the hotel, I realized the assumed Aussies were backpackers. Big backpacks. You know the drills.

The actor's name is Adam Scott. I don't think I saw Adam Scott.
And your responses...