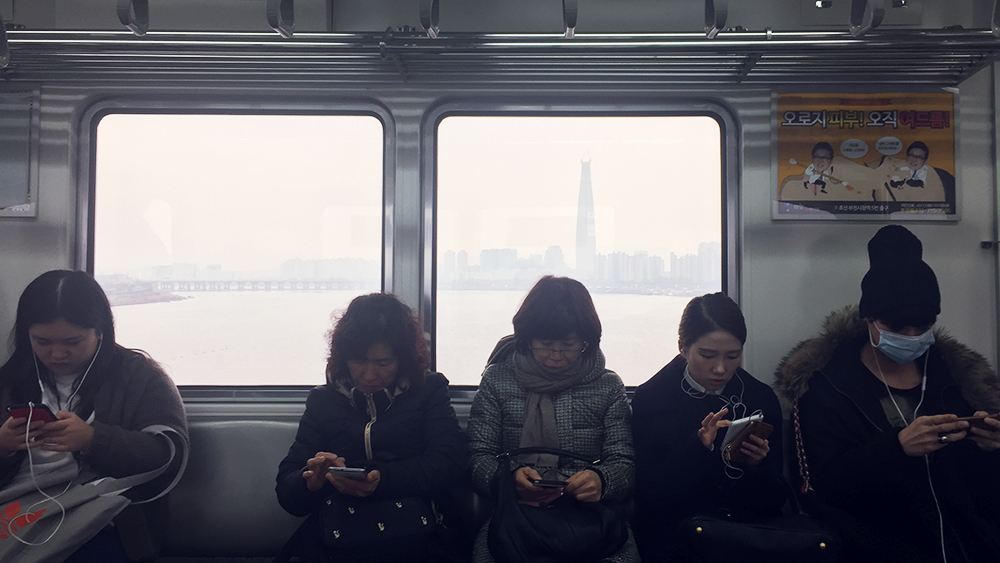 I may have spent a good amount of time in the past couple of years just checking the weather.

It was a necessity, sometimes. I kept on checking on it in the days leading up to our trip to Seoul. It was winter, and I badly needed to know if my decision to buy a trench coat instead of a more obvious winter jacket would pay off.

On the first full day of our trip - the city tour - the highs were at two degrees; for most of the day it was below freezing, at one point hitting twelve below zero. Twelve below zero, on the day we'd be out and about! On the very first day! There was a tinge of excitement, but at the same time, there were the minor logistics concerns that might spell doom and gloom if done wrongly.

I bought a new pair of shoes, and while they did well with the grip in slippery, icy floors, the laces - they weren't exactly sneakers - did not tie very well. Or maybe it's me. It took me longer than most to know how to tie my shoes - I learned it as a kid, okay? - but up to now I'm still prone to having my laces untied while walking. So it was the case in Seoul. Also, it's difficult to tie your shoes while wearing your gloves, so you had to remove them before dealing with your shoes, meaning your fingers will get, ehrm, extra cold for a few seconds. It wasn't fun, but we had to do it.

The good news was, the trench coat was enough. Well, I wore three layers, including the trench coat, but they weren't particularly thick layers, and everybody else had more on. The bad news was, at one point I got so tired I almost had an asthma attack. This led to us walking around Hongdae looking for a drugstore, only to be told that we needed a prescription for medicine. Perhaps that's what ginseng - and all the hotteok and tteokbokki sold in carts on the street - is for.

Oh, and there's the fact that it could be much, much worse. Our tour guide - her name was Sunny; she was really, really nice - told us that it was an unusually warm winter. Twelve below zero. Unusually warm. We didn't believe her until we realized we weren't seeing snow. Our only experience with it, Shalla and I, was for ten minutes at Nowon, after dinner with her aunt. It was snow and rain. No flakes, just half-arsed ice bits.

I haven't had the chance to bring out the trench coat again. Admittedly, I bought it so I could use it here in Manila. Good intentions. Maybe I could use it as formal wear. But a trench coat is heavy, and I use public transport, and also, it's fucking hot in here. If you don't believe all those things about greenhouse gases, and you live in Manila, I don't know anymore.

I haven't been to places with actual winters since Seoul, so the trench coat is in storage, still in storage, waiting for the time when I can afford to fly myself to some place with snow. I didn't bring it to Taipei this year, although at one point the lows were at eight degrees and it felt really chilly. The turtlenecks and the long sleeves went out, but not the trench coat. I survived. I survived fashionably, because I at least managed to bring out my semi-schoolboy look: collared shirt, jumper, thicker jacket Shalla gave me as a gift.

It was a look I devised for myself in Hong Kong. I have been there for four Novembers in a row, and I've had a good idea of how cold it can be: temperatures in the low twenties, with a constant wind that makes things colder. But it can still be unpredictable, both the temperature and my response to it. Three years ago I pulled off that schoolboy look, down with a tie (I was from an industry conference and I needed to transition easily to tourist mode). Two years ago the temperatures were actually touching the thirties, which meant my jackets, even the thinnest one, was useless. Last month, I managed to survive an evening in shirt and shorts, contrary to what the locals wore.

Unpredictability aside, there is something appealing about having to wear thicker clothes. Perhaps it's because I live in the Philippines, most of which is sweltering on good days. (The exception is Baguio, of course, and that is why Dale does not want you to go there.) Maybe it's the bad planning and the aversion to any open space - how can you earn from open space? I have been to Singapore and Kuala Lumpur, and they lie closer to the equator, and yet despite the humidity (which makes me very sticky during city walks, lah) it feels more relaxing. Here, it's all concrete and glass, no diffuser.

That's made the past few days a bit of a delight. It's actually cool here. My phone actually has the temperature at 23 to 28. 23 to 28! We always expected a thirtysomething in here somewhere. There's always a thirtysomething in here somewhere. Not this weekend, though. For once, being outside feels like an ordinary November day in Hong Kong: slightly overcast skies; a light, cool breeze; no urge to cover up. Finally, for the first time in a while, you're really having a cool Christmas. If I knew any better I would call it a throwback to my childhood, when I just moved in to my current place in Cavite, when it was still cool, before development took over and it took me thirty minutes to get from my subdivision's gate to my home, all in the name of fucking solidarity.

And then you realize that there is a storm elsewhere in the country. That explains the cold. Sunday, it was like paradise; Monday, it was raining and dreary. Familiar territory. I walked Makati carrying a lot of stuff, hoping I don't have to bring out an umbrella. My shoes - the ones I bought for Seoul - were half-drenched, stepping mistakenly in puddles.
And your responses...