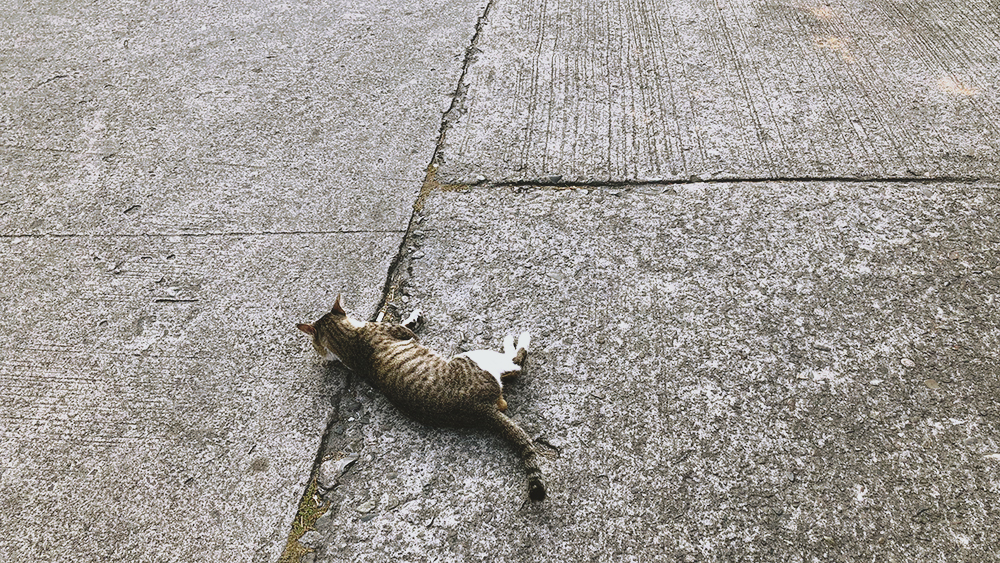 When I was... I wouldn't say I was a child. I wasn't. I was a teenager. Perhaps a new teenager, around thirteen. Around that time, I made this habit out of looking out of the car window and counting how many dead cats I saw.

Typing that paragraph in, I know that sounds morbid. I know that makes me sound like a psychopath.

But then, I was thirteen and it just felt like something to do, a tally to make. How many dead cats will I see in a calendar year? I must have counted thirty-six instances, of cats in different states of being run over by vehicles that probably have never noticed it.

Okay. I sound like a psychopath. We just came from the whole Cats of Shang story. I did not, I do not, I never want to see cats die. The same way I don't want to see a dog die. And I own dogs.

The point of that introduction is, I have, at one point, been hyper-aware of cats. And then it disappeared, because I got, well, hyper-aware of other things. Film cuts, for example. How cold a classroom is. The way a particular pair of Chucks skate across the floor of the Miguel building.

We never really had cats at home. My aunt has. Well, she had, until they slowly died one by one, of old age, I must add. There are cats outside my home, coming in and out, rummaging through the trash, hoping for some food. Don't feed them, we're constantly reminded, or else they'll wait for you.

Then came Shalla. She is a cat person. She had cats before we met; she had cats after we met - although those cats just came to her then home, and proceeded to alternately multiply and disappear. At her workplace her reputation for being a cat person is such that her colleagues would often tag her when they see anything cat-related.

However, the in-joke is, I am the cat in the relationship, because I'm... touchy? Paw-y? Carelessly paw-y?

Shalla also has a pet dog, and my pet Labrador likes her more than me, arguably.

I think the cats around me have sensed that I am becoming a bit more aware of cats. They're returning to the front yard, trying to have some food, or, more likely, looking for a change in environment. The same cats turn up, perching themselves on top of our cars. I'm too blind to see the scratches, if any.

I also once saw a cat poop. Again, not the sort of thing any human is supposed to see. But I saw it with my two eyes: a cat dropping stuff in the middle of a small crater on the road, and then, perhaps out of shame, attempting to cover said stuff with... nothing, because he pooped on concrete.

I'd still not try petting a cat that much, though. I now know when a cat is just forced to take your affection. He's a weak cat, that.
And your responses...