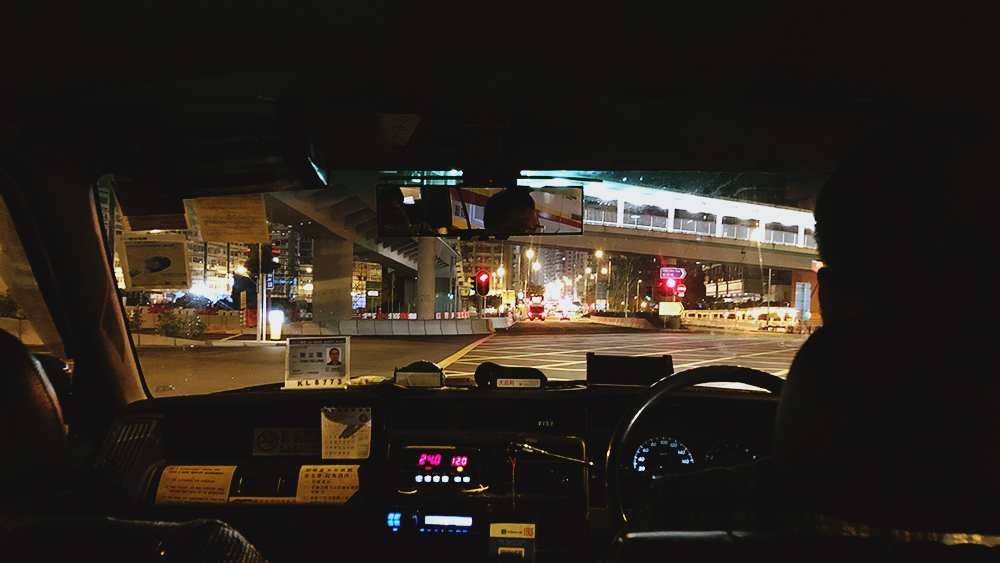 I usually have my earphones on, but not this time. Not despite the long slug from the arrival gate, to immigration, to baggage claim, to the foreign exchange counter, to the queue for train tickets. Not despite the almost half hour on the train. Not despite the long wait for a cab, a wait we wouldn't have done if not for the fact that it's almost midnight, and the free shuttles to our hotel are done for the day.

Arguably it's courtesy. I get bored easily so I plug in the earphones and listen to whatever. Today, though, I am with my girlfriend, and it would be weird if I have something plugged in while she talks. I don't want to be more of an asshole than I already am. Well, that, and I didn't bother to make an eight-hour playlist, which should cover our airport to the one in Hong Kong, and the train and cab connecting it to our hotel. But then, one, what would I listen to? And two, knowing how fussy I am with what I'm listening to, would I even have the strength to be a slight perfectionist about it? The flight lands at half past ten. I'm not a late night person, at least not ideally. I cannot sleep on the plane, but I think I almost did.

All right, I did listen to something on the plane. The inflight entertainment system had a compilation album of AKB48 singles; I listened to "Heavy Rotation" on heavy rotation.

Otherwise, I had nothing on. The Spotify playlist I saved for contingency purposes turned out to be a sleepy one. Nothing wrong with that, but we are tired, and I have to stay awake. It's me claiming to be responsible again. This is Shalla's second time in Hong Kong, but the first without the drama of being quarantined, mistakenly diagnosed with the AH1N1 virus. I am definitely being an asshole, taking charge of this part of the trip, tightly holding on to the moment when she finally walks past the health check and she isn't flagged down for being too red on the thermals. But then, I'm excited, and at the same time, I'm not, because this is Hong Kong. This is our second solo trip as a couple, but this is a city I have been to four times in the last four years - and will return to in two weeks.

At least I can say I am experiencing the city differently, for a change, slightly. I'm not on the island, but rather in Kowloon. There is a different mix of stuff around us. My usual hotel - chosen out of proximity to the site of the event I normally attend - is surrounded by hardware stores. Our hotel this time around is surrounded by beauty stores, and there's an Apple reseller to boot downstairs. In hindsight, it'd turn out to be a more simulating mix of neighbors, or maybe it's because my usual can scream business because I am there for business.

Also, I have no earphones on. The train to Kowloon is uneventful. It gets you to your destination in less than half an hour, and there's no drama in between. You're comfortably seated. You hear nothing but the whooshing of the train, and occasionally, the on-board announcements. "Next stop: Tsing Yi station."

It's even more quiet on the train station we get off on, because it's almost midnight, and all the stores are closed. We fall in line on the taxi queue. Cabs go here, but not frequently; one arrives every five minutes or so. We were seventh on the queue. Just enough time to listen to one foreigner ask another about how the taxis here work.

"I just go here for business," the lady, possibly in her fifties, told this guy, possibly in his sixties. "But that's pretty much how it works, yeah."

In the cab, I listen to the radio. I thought it's a talk show - in Cantonese; I can't understand anything, of course - but then they go to a song, also one in Cantonese.

Shalla is half-Taiwanese, so she doesn't understand Cantonese. They use Mandarin over there. That, and she isn't really that close to her Chinese heritage, what with her father dying a decade ago or so. But then she had a pretty handy tip anyway. Mandarin flows more smoothly. Cantonese can be jagged. Does that make sense? It does explain why Hong Kong locals can sound rude, or at least matter-of-factly.

Are we going the right way? No. Are we going to a different hotel? No. It's a one-way road. This is the right way. Cabs here charge an additional HKD 6 per piece of luggage, so that's an fare of almost HKD 50. We have no choice. We would've taken the shuttle, but then, it's bang on midnight. Can I sleep? No. We have to check in, and then we have to eat some sort of dinner, because Cathay Pacific no longer offers us proper meals. Short haul, whatever.

There is a Filipino on the hotel reception staff. As we Filipinos do, we instantly recognize each other's heritage. We both breathe a sigh of relief. I can speak my language to someone else; not that I can't speak English, but I don't have to slur my way through absent-mindedly attempting to sound foreign and being ultimately hard to understand. He finally has a sliver of home to relate to.

Kenn - his name tag says that - seemed to have forgotten how to check us in. He's asking a colleague to remind him how the process works. Tap here, tap there.

"Are you here for business, sir?"

This could've been an awkward situation, but somehow the fact that we're tired and we speak the same language has diffused things down to a halt.

I wish I could speak Ilocano. That would've been a more awkward situation, though, me attempting to speak another language. I wonder if Dale has met him somewhere. But no, we're on vacation. Let that be a passing thought.

Our room is on the eleventh floor, and it overlooks a bunch of rooftops. It's dark, so we see nothing. We go down and get ourselves some sort of dinner. Shalla has cup noodles and I have something with rice. We fall asleep at two in the morning, It's all right. We can wake up late.
And your responses...