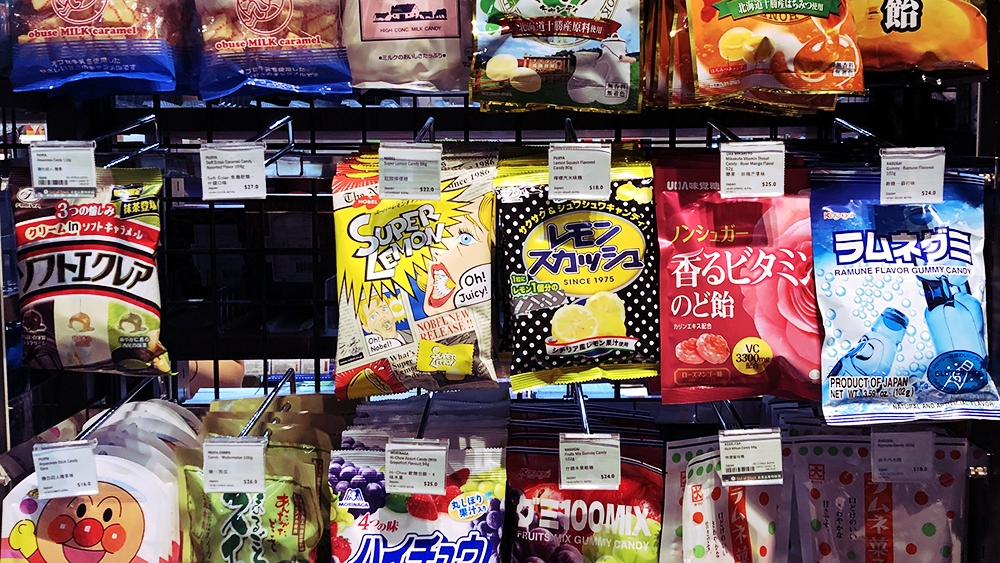 We did, frankly. The set-up, when we were kids, went like this: the last place in the itinerary whenever we went to the mall on the weekend is the supermarket. Back when SM Southmall looked sterile (and when it was much bigger than it is now) we'd make the trip to the supermarket, with its high ceilings and almost-as-high shelves. Or that's me being eight, maybe nine. My sister and I would sit at the bottom of the shopping cart; for some reason we were convinced that area was made for kids like us. From that perch we'd see stacks of jars and boxes and cans, and rows of price tags too, of course. I have a distinct memory of staring at a can of Birch Tree powdered milk, figuring out what else is in the label apart from the titular tree and the obligatory cow.

It seemed like a normal thing to do. There were a lot of kids in the supermarket with us, after all. Only now has it occurred to me that there's another option: that the parents (or parent) would do the shopping while the kids stayed behind somewhere, being watched over by, say, another parent, or a relative. Was the supermarket ever considered boring for kids? Was pushing the cart never allowed? You don't imagine you're "driving" the cart like you would a car? Am I the only one who still does that?

So, yes, we're supermarket people. My sister and I, for some reason, bond when she does the groceries - she lives alone now, mostly. Sure, things change when you grow up and you understand just what the place is for. I'm taller, for one. The shelves don't seem so high anymore. That, or retail trends have moved to the point where those shelves are lower, because we're squeezed for space and you can no longer have high ceilings now. But really, supermarkets are just another place for conversation, only with the possibility of you picking out a particularly good bunch of bananas.

As for my younger brother, well, he works for sales now, which means he's in supermarkets frequently. Also, there's apparently this anecdote where he admits to having his mouth water at the sight of frozen meat. But then, I'd attribute that to him having the need to be so masculine, perhaps to offset what I think is him thinking I'm secretly gay, or at the very best, a very lame older brother.

It did occur to me just recently that I have been to supermarkets in all sorts of places, even the foreign cities I've been to. I'll say it's because I've always been interested at the differences between theirs and ours, even if half of the time I'm begrudgingly buying chocolates to give away to a whole office. (It's not fun popping in to the grocery closest to my hotel in Singapore - Cold Storage, which means it's at the slightly higher end - just to buy chocolates. And, for myself, one pack of Horlicks. Just one pack.) Maybe it's the supermarket person in me, but I do get excited just exploring a place the locals of a place would have to go to.

Take that one time in Seoul, when Shalla's aunt toured us at a supermarket somewhere at the Nowon district. All right, I frankly remember little of it, because I felt a little harangued by the long trip. But I remember not finding the rice drink I wanted to try in Seoul. It's Korean, but interestingly I first discovered it in Hong Kong four years ago, and then failed to find it there in subsequent visits. I ended up with a substitute - a different brand, a different color, a totally different drink, as it turns out; it had rice bits, which you really can't consume if you're drinking it from a can. There were also these strawberries which were so big and sweet - and cheap, as it turns out. We snacked on them while watching another yearend music program. I think I was munching on strawberries when Wheein came on.

I have even vaguer recollections of the supermarkets in Taipei, but in my defense, I frequented their convenience stores more, because those were everywhere. They're so ubiquitous I'm pretty sure I saw Gudetama-themed make-up being sold in one. On my first visit, I remember popping into a small grocery near the night market we were visiting to buy beers, those supposedly being the best partner to stinky tofu, or so said our hosts. (I believe them.) I got two cans of Taiwan Beer and tried to sneak to the cashier, with the express instructions that I should pay for them before our hosts end up paying for it themselves. (They're generous hosts, but they've been too generous.) I failed.

In an ideal world I'd be going to these supermarkets, browsing the shelves, pointing out what they have that we don't quite have. But then, that's weird tourism, especially if it's your first time in a city. Why go to the supermarkets rather than the tourist traps, er, spots? What do you get from that? I remember seeing herb sproutlings at the chiller section of another Cold Storage in Singapore, but then I see those here now, too. I think I saw that in Cebu the first time. But then - asshole alert - I consider myself a relatively well-traveled person now, and supermarkets are, arguably, something off the beaten track. Go where the locals go. But then, there won't always be labels in English to help you.

Shalla and I went chocolate hunting in Hong Kong a few weeks back. The convenience store across our hotel had these mint chocolate Kit-Kats and we assumed they'd be cheaper in the supermarkets. We popped into a Wellcome, where we realized just how different the consumption habits of Hong Kong's locals are. There were no individual packs, but rather, packs of three, or of six, or in the case of the Kit-Kats, nine. And they weren't even the mint chocolate ones she wanted. It seemed they were a convenience store exclusive.

But then, that Wellcome was open 24 hours a day. Maybe we needed to try another supermarket? We went to a ParknShop a couple of days later. The one we went in is more typical of Hong Kong supermarkets: located in a cramped basement, accessible only through a really tight flight of stairs, and the selling area is just filled with stuff. Still no luck.

I returned to Hong Kong two weeks later, for a work trip, and my colleague and I went to a Citysuper - she now was the one tasked with buying little gifts for her friends. Now, that's a completely different beast. Pretty much everything was imported, and in sizes I was more familiar with. And the lighting was dim. And the choice was overwhelming. I found myself at the Japanese candy section, trying to remember just what Shalla said about it - how she has a preference for Japanese candy, how there's just a lot of options out there if you pursue that route. Do I get the milk candy, or the ramune candy? Or maybe the gummy bears? Do I have money left to begin with? I ended up with a box of mint chocolate mochi. No Kit-Kats. Even the convenience stores stopped carrying them when I returned. It was a limited promo, as it turns out.
And your responses...