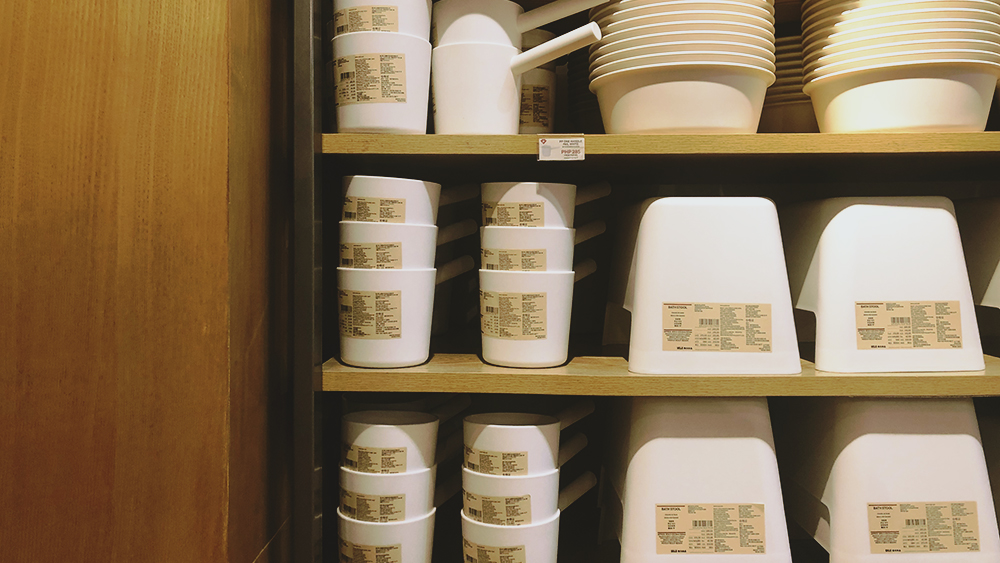 There were two ladies standing by the shelf, doing heaven knows what exactly. One of them was on the phone, which meant broadcasting to the world that she has the iPhone 11 Pro. (No impact, because a lot of people already seem to have it.) The other was just, I guess, staring at the contents of the shelf.

As I walked back to Shalla, the two ladies unsuccessfully stifled a chuckle.

"Tabo, gusto mo?" the one on the phone said, presumably, to whoever's on the other end of the line.

This, by the way, was at a Muji store. Yes, we bought the Muji "tabo".


This being a blog written mostly in English, I would be inclined to call it a "dipper", but then Muji calls it a "one-hand pail". You know words and how they make things see more important than they actually are. But whatever you call it, it doesn't change the fact that this is a "tabo", and it costs PHP 365 - and that's no price to pay for something you always see in a Filipino bathroom.

But that hasn't stopped us from wanting it. It's not because we think of ourselves as above the fray and only deserving of the best, although my mother would point out my preference for the branded. And besides, Muji items are not branded, in the sense that you don't see their name anywhere; that's why they're positioned as relatively inexpensive in Japan, although here, as with most imported items, they have a sheen of superiority (and perhaps bureaucracy too), and thus the prices have to match.

No. We wanted it because we felt it was a good product. (Yes, you can claim all this is just an excuse, but whatever.) Shalla was the first to spot it, while browsing for desk organizers and notebooks. She liked how it felt in her hands. I liked how the handle was rounded and how hefty it felt. For the next few months, whenever we returned to Muji - mostly to browse, but I must've bought at least two items of clothing there - we went back to the "tabo", er, "one-handed pail", and said to ourselves that, someday, we will get it.

And then the whole thing went viral. Well, it really was going to: it's PHP 365 for a "tabo". However well-meaning the price is, and however much you argue that the social media associate who posted the thing online was just doing his work, you can't help but think that PHP 365 for a "tabo" is fucking ridiculous. At some point someone could've pointed to this thing as proof of how out of touch the elites are, but then it's the affluent people who were cracking the jokes, and you really cannot be too close to the bone. But it didn't really have to. It's also made of plastic, also made in China, but it costs twice, thrice as much? It's fucking ridiculous, and that's all that it needed to be. So you keep your head low for a while. But we still revisited the "tabo", and I would flip it with one hand and fall for how round and smooth the handle is. One of these days.

That day was when the two ladies, with the tita clothes and the amiga vibes, failed to mask their laughter. Maybe they were laughing not at the fact that I bought the "tabo" but at how I said "excuse me" while getting it, but whatever. In this case, perhaps, we've had the last laugh. The "tabo" was at a discount. Eighty bucks off. It was at just PHP 285.


Did we really need a new "tabo"? We have two in the flat, the sort you'd buy for cheap at a supermarket. And, if I'm to be honest, they do the job well. They have to. These things have been more or less perfected. You cannot reinvent the wheel, or the dipper, and all that.

But then you notice the little details once you do end up using it. It is hefty. It doesn't feel like you'll drop it and spill all the water down the bathroom floor. Also, it's deeper, meaning more water in one pour, meaning you don't strain so much when you have to refill the whole thing, especially if you're seated at the toilet while doing so. (Sorry.) I think it's designed well, but then, this is a society where design is just about the aesthetic, something you pay extra for rather than something that informs how the product works.

Or am I just saying all this to justify to myself the fact that we spent more for something that I can easily buy for less? I don't know. Perhaps? A week after purchase, I must admit the sheen has gone. The "tabo" doesn't feel special anymore, but then again, it's supposed to be that way. I've already gotten used to how much better it works compared to what we had (and still have) before, to the point that I'm probably taking it for granted already.

I know all this is hard to justify, as if I really have to. I know I can just say "we've always wanted it and that makes us happy" and get on with it - it's how this world works nowadays, after all. But, well, okay, I have to admit something. I felt really smug when we decided to buy the dipper, because I had to say "excuse me" to those two ladies to get it. This guy, wearing a slightly old shirt and a slightly old shorts, was buying that. Was their laughter uncomfortable? Maybe, perhaps. But it says a lot about all of us, don't you think?

Besides, it's not like we buy things for the sake of showing off. The next purchase we made, a few days later, was at a discount, and is not a high-end item - no LED display, no water dispenser, no cool pack, no extra doors. But the refrigerator does have an ice maker. Not automatic, but it's all right. It does the job.
And your responses...