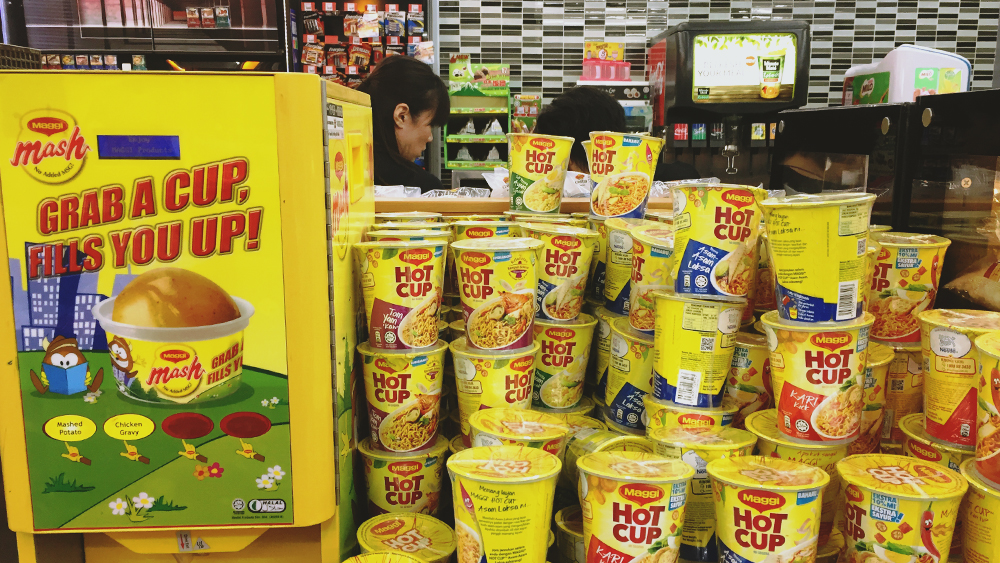 I was in the mood for noodles this morning, so I went to the convenience store.

There are two convenience stores near the flat - one is in this very building, while the other is just across the road - so chances are, when it's not available in one, it's available in the other. Or, well, not really. I was hoping to find some Indomie but it was in neither store, so I ended up spending a fair amount of time just figuring out what to buy.

It was half past six in the morning, on what turned out to be the coolest day of the year, something that's all too rare considering how global warming has broken our (surprisingly valid for a tropical country) notion of cold Christmases. I remembered something, most likely prompted by the cold, something that I never thought of as something I giddily looked forward to, at least until then, when I managed to piece it all together.

I've been to six foreign cities my entire life, and in five of them the hotel I was staying in was right near a convenience store. Oddly enough, the exception is Singapore: I've been there five times (I'm not counting layovers) and for some reason the convenience stores have always been a long walk away. I guess that's what you get when you stay in a country that's planned down to the inch.

Bangkok, well, I honestly don't remember. But we stayed in Sukhumvit, and that's a pretty busy area, so I'm sure I entered a convenience store at some point. For some reason, I remember the fish and chips place a quarter of a kilometer away from the hotel, because it was the first time I ever had that. It's a particular memory: fish and chips, a beer - I was just starting to drink beer then, and already I had decided to sample as many mainstream foreign beers as my holidays would allow me - and football playing on the television.

The first time I was in Kuala Lumpur, it was New Year's Eve. It was also when one of my most cited, but ultimately useless, observations took shape: that Malaysians have pretty tepid beer. I mean, understandably, because it's not really a beer-drinking society. But I remember being pretty excited about trying it out, and realizing that I have no idea what the "big" beer brands there are, because of course there aren't any.

But then I wasn't paying that much attention. I only really began to do so in my later trips, when I started flying out on my own. On my second trip - technically to Puchong, not Kuala Lumpur - I wasn't near a convenience store, but it's offset by the fact that I was near an Old Town coffee shop, where I tried a cup of their coffee without milk or sugar. It was a pretty good cup. On my third trip - the one where Shalla finally met Zaty in person - I remember being amazed at the idea of Yakult coming in multiple flavors, and me realizing that the one flavor we have in the Philippines equates to orange in the Malaysian market. That, and the existence of a mashed potato dispenser, although judging from the Maggi branding I'm very certain it's powdered.

I didn't stay at a hotel during my first trip in Taipei, but rather, in a spare home owned by one of our hosts. It was a bit of a walk towards the nearest FamilyMart - I remember being afraid of getting lost, even if all I had to do was remember that the neighborhood revolves around the elementary school - for breakfast that I'd take home anyway, alongside an English newspaper. But then I met Jackie several times, back when she worked there. My other distinct memory was picking out a bottled tea drink somewhere in Ximen, when she brought me to this noodle place she always brings friends to.

The second trip with Shalla... to be honest, I don't remember the convenience stores. Oh, right, this one 7-Eleven sold Gudetama lipstick or something. I showed it to Shalla, somewhat giddily.

Seoul is also surprisingly vague, but then there were a lot of things to take in when we went there - the music, the many make-up stores, the fact that it's winter. There is a convenience store near our hotel, one we visited almost daily so that we can try the drinks they had on offer. All those milks. Banana, of course. (Binggrae banana milk is sold here, in tetra packs rather than plastic bottles, but the ones you buy in South Korea is much better.) I had chocolate, which wasn't memorable in hindsight. Shalla had this big bottle of watermelon milk. (Contrary to my recollection, it's not at the GS25 near the JYP headquarters.) But really, they were more useful for those heat packs we ended up needing across the six days we were there, as well as bottles of Vita 500 that I didn't realize I needed until I fell sick on the fourth day. Besides, Dongdaemun has a lot of street food stalls, and I couldn't read High Cut.

Now, Hong Kong - of course I've been here loads of times, most of them by myself. I stayed at the same hotel every year for five years, and there was always a 7-Eleven across the entrance, where I'd always buy a copy of the South China Morning Post and whatever I was in the mood to drink. The first time, it was Morning Rice, a Korean drink that I surprisingly never found in Seoul, and I never found in Hong Kong since.

Shalla and I stayed in a different hotel when we went there two years ago, but there was also a 7-Eleven across the street. I'm sure the cashier was a bit peeved by us, or by not-really-noisy me. But then, we finished up the store's stock of Horlicks and mint Kit-Kats. It was never restocked for the rest of our trip.

It's pretty obvious why I'm not this fascinated with the convenience stores here. I mean, I'm pretty intimate with them. There'll always be siopao and soju and random chocolate bars. Our convenience stores do what we ask them to do, but a part of me wishes they'd be like the convenience stores elsewhere. I mean, I know I sound stupid here, but my mind was blown when I found myself at a 7-Eleven in Taiwan that offered photocopying services, or when I realized convenience stores in Hong Kong won't really give you receipts - a hint I never got until a few years in, when I noticed the cashier had a puzzled look when I asked for a slip of paper with words I couldn't understand printed on it. And then, of course, there are the items you'll never find here in the first place, like candy bars we'd never see here, or all those boxes of Chinese medicine. I love staring at shelves. A colleague told me I could work in retail precisely because of this.

How long until we can finally get out of this place?