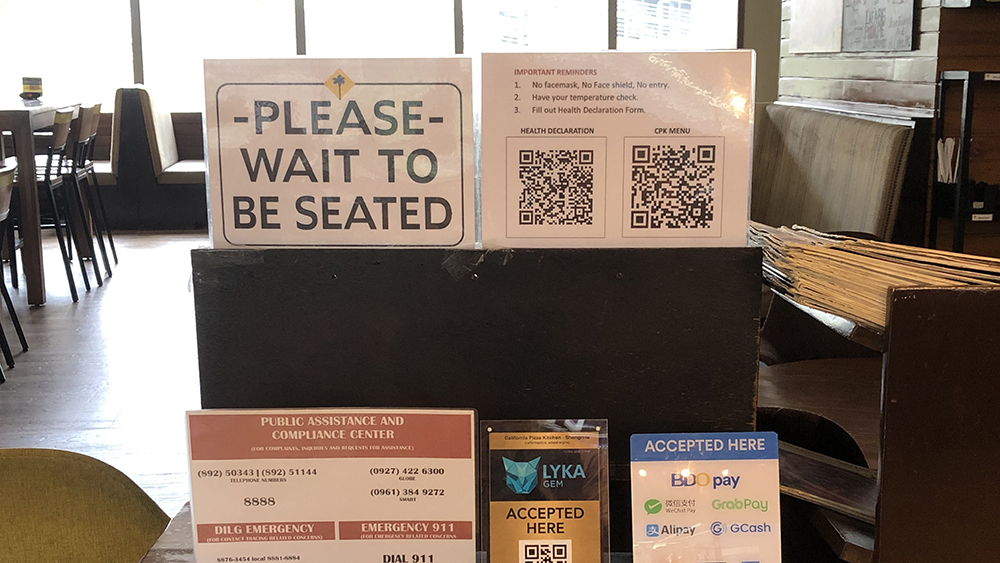 I am back at the mall. It's the grocery run, and like the last time we were headed towards another lockdown, there didn't seem to be a rush to stock up on goods. It seems people already know that, one, the groceries will remain open, as they should, and two, that there's really no point in stocking up for what is clearly going to be something that'll last beyond two weeks.

So, the mall is as quiet as it was the afternoon before. Sure, it's just an hour into opening time, but you just know people have ditched any plans to go window-shopping because the declaration screams "it's here", and also, why bother? Why go out when you can only really browse and not do much?

The food court - where I bought dinner yesterday, and where I am buying lunch today - is empty. All the seats have been taken away, and the lady behind the counter isn't feeling good about what's going to happen next.

Shalla and I have a few go-to places when I'm not in the right frame of mind to cook dinner, for example, or when we're just in the mood for something else. Yesterday was Sbarro: an order of baked ziti with alfredo sauce (although yesterday we had chicken pesto, which was a good decision) and a slice of pizza each, which can last until the next day. Today is Sisig Hooray, the only sisig Shalla would choose to have, in her words. One pork barkada, and since I don't have cooked rice at home, three orders of it.

Whenever I go to the barbers I end up getting dinner from any of those places, or maybe at KFC, or maybe at Max's. Sometimes we just have them delivered, especially in those days when I didn't have a car and I couldn't decide on what to cook. It says something that these more established places are thinking of calling it quits, at least on this part of the world close to me. Sure, KFC will most likely stay, and Max's will too (as they should, as I've just discovered their chicken sisig rice bowl) but any reduction of choice isn't really a fun prospect to play with. What more the even smaller places?

Around this time last year I interviewed Edong for the magazine, and he talked about how the fact that people still sought them out despite the height of lockdown carried them through. Surely a lot of us feel the same way. We may be stuck at home but it won't stop us from seeking out the things that bring us comfort. But businesses can't survive on good faith alone. Restaurants, as I mentioned yesterday, need foot traffic. Anyone selling what's been deemed as "non-essential" need it as well. Sure, there's this whole e-commerce thing, but - and I say this as someone who's worked with e-commerce stakeholders and is kind of one himself - it's not as easy as people make it out to be.

Last night I saw a Duterte apologist talk about how we're not the only country who's in lockdown, and about how we're really the only ones complaining about it. Setting aside the whole "I'm offended because you don't like the things the people to whom I've attached my whole self-worth do" thing, the answer really is simple. Yes, we're not the only ones in lockdown. Other countries are facing surges and have reintroduced restrictions, even the ones that are further along in the fight against the pandemic. For the most part, they're not complaining because they know there's a plan to make sure they get out with as little long-term damage as possible. What's ours?

It's been almost a year and a half since this hell started, and all we've been waiting for is a definitive roadmap to properly addressing the pandemic. Instead, we're in this cycle of lockdowns, calls to amp up testing and tracing, calls to reopen the economy lest it receive another battering (like this particular battering has ended), and fingers pointed at the people for being stubborn rather than acknowledging that they're just confused.

On Monday, the president said virtually nothing about the country's next steps to address the pandemic. That same day, chaotic scenes from Malaysia's parliament went viral in some circles, including mine, because I know a couple of them. (Malaysian citizens, not Malaysian MPs.) I wouldn't delve into the political context of why they're talking on top of each other, but they were broadly arguing about their next steps to address the pandemic, particularly as emergency measures are set to expire on Monday. What's ours?

What's so difficult about continuously upping our testing and tracing capacities? Improving our genome sequencing capabilities? Speeding up our reporting of new cases? Agreeing on economic stimulus packages to save businesses as well as workers, freelance or otherwise? Expediting our procurement of vaccines and distributing them to every Filipino in every part of the country as soon as possible? Ah, yes, it's our tendency to do the bare minimum and pass it off as the best in the world, right. It's how we resort to lockdowns, curfews, liquor bans and fucking face shields to prevent the spread of a more transmissible variant that is very likely to have done its worst for months. It's how we talk about vaccines as if it's the only thing we need to save us from this hell, without exerting more effort to get them into our arms. It's how we boil everything down to "how dare you for complaining". And no, it's not going to change with a new president. I'm afraid this is where we will still be in a few years' time. That's just what we are. The bare minimum is good enough.

See? I did say this a few days ago. I don't like repeating myself. I don't have a choice, but it doesn't mean I have to like it.