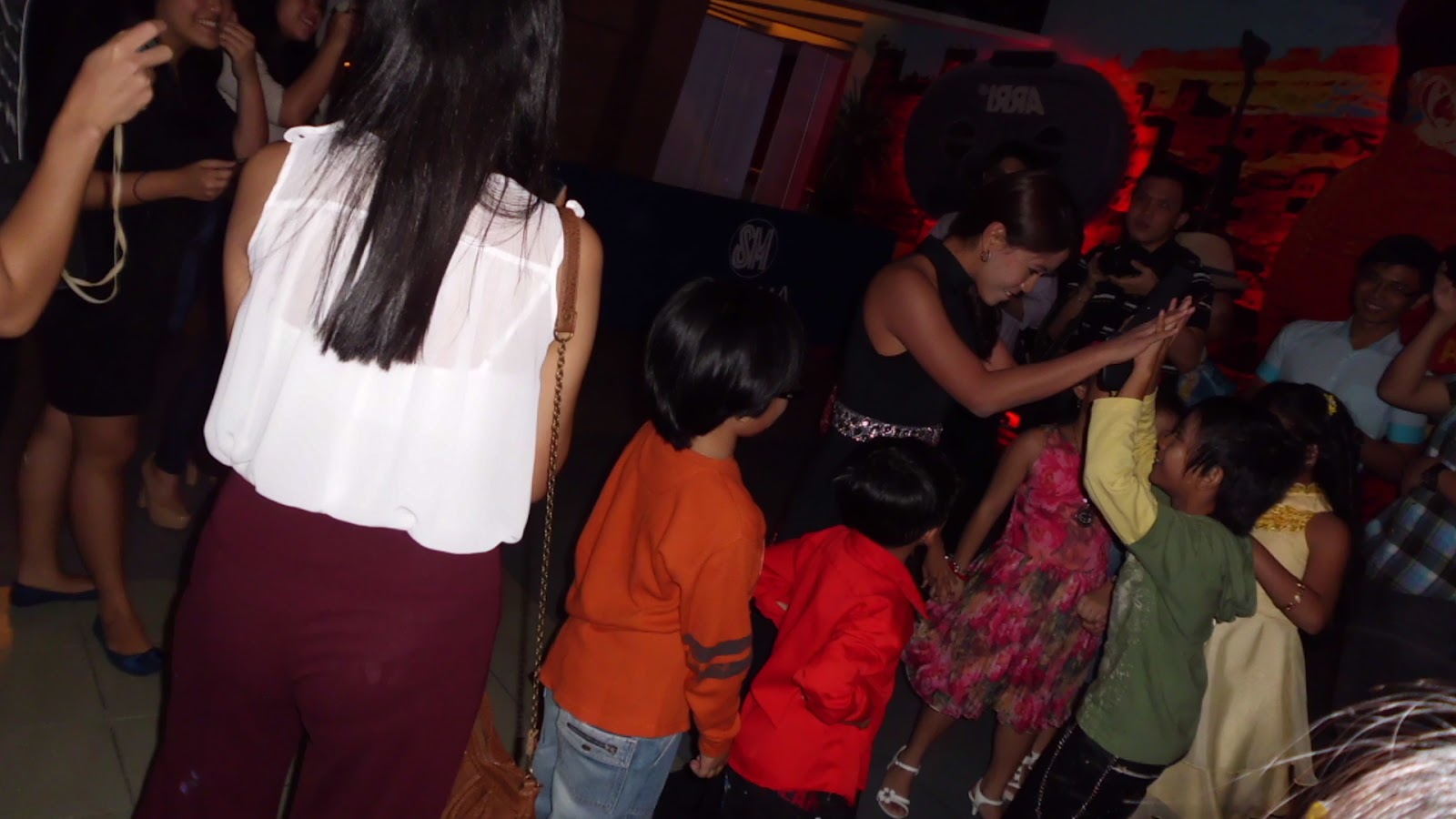 The last time I attended a film premiere, for Paglipad ng Anghel, I was a bit wary that Sir Doy had forgotten me. We saw each other after the screening; he smiled and nodded at me, and then left.

To be fair, that was his night. It was his film. And he definitely isn't the type of person who'd forget his students, especially his more recent ones, just like that. Last night, another film premiere, we finally caught up with each other - he was headed to the cocktail area, while I was standing around, a bit foolishly, wondering if there's anybody else I know beyond facial recognition.

"Ano na trabaho mo?" he asked. The usual questions, then.

"I write for an American entertainment website," I answered. The usual answers. But I was feeling a little more proud of myself. This is, after all, Sir Doy, the guy who wrote "you can write" in one of my film criticism papers. He smiled and nodded at me, and then left. "Kita tayo later," he said.

We were attending the premiere of Krizzie's film, Tahanan. A feature-length film. Certainly makes for a change after watching Jason's Elysium and Misha's Oliver's Apartment - both shorts, I must note. It doesn't make it any less surreal, however. In both instances it felt like watching a child graduate, which is weird because they're both older than me. But I saw Jason explore his film options, mostly in thesis, but in part through the many school projects we've worked on. (Only he could get away with considering having me talk to a prostitute for a school project, an idea I never warmed to.) Misha? There's the thing about her dropping her business course and taking all of the electives we took, or had to take.

At least, with Krizzie, that feeling is more valid. I'm a year older than her. I think. Definitely I'm a batch above her. She's this video whiz kid who always wore plaid, or so I always imagined. I know we took the same course (more or less) but I never saw her often in the second floor of Miguel. But I know she's always been into film. I don't know the exact story, but I know the girl's a hard worker. Saw it myself when I attended (well, technically, got invited to) Ating Gabi, an event she spearheaded as CLA college government president. We never really got to talk much that night, for obvious reasons.

"So sorry I never got to say hi to you properly," she told me last night, right before, or perhaps after, the usual hugs. It was a full hour after I arrived at the Megamall's cinemas.

I wasn't being jaded or anything. I knew. It was her night, after all. And by then I've seen a bunch of people that I did know. Kimmy was there with Ian, who worked on the film. EJ was busy eating his popcorn ("it's a movie," he'd counter) while talking to Keane. Janelle was also there, in blindingly high heels, although I just assumed she got thinner. Michelle was the last to arrive in my sort-of circle, sporting a shorter do, one that screams "editorial assistant at posh magazine". I had to describe it like that, sorry.

"Wait lang, ha," Krizzie later said, begging off to meet more well-wishers. There were a lot of them. (The premiere moved locations because a lot of guests confirmed their attendance. "She invited a lot," Kimmy said a few times during cocktails.) Actors, crew, family, friends, friends that made the whole thing feel like another La Salle reunion of sorts, except for the fact that there were a few familiar faces to me. I am now the parent. And Lauren Young fans, too.

Tahanan revolves around a college student (that'd be Young) who, initially reluctantly, goes to an orphanage for a two-month immersion. A typical Lasallian experience, I thought. You fulfill a school requirement, forever keeping in mind the need to be sensitive to the kids you'll be dealing with, and then when you get there, you get attached to them. And then, that's it. I wonder how the kids I met at Barangay Tagumpay are now. All grown up, definitely.

Being a bit of a feel-good film, Tahanan has a proper happy ending: Sam gets past her reluctance and realizes that she isn't the one helping the kids, but rather, it's the other way around. Perhaps the need for a realization bogged the film a bit down - the melodrama at the end felt a bit too much for me. But what made Tahanan work was the chemistry between Young and the kids at the orphanage, led by Kyla (played by Sabrina... agh, memory fails me again). It's like they really lived together. And it's not just the wise-cracking script, either. Improv? was a dominant through crossing my mind.

I'm not exactly sure. What I'm pretty sure of, though, is how well the kids worked with the crew. When I got to the cinema at half past five, I saw some of the kids there, waiting. Krizzie arrived a good forty-five minutes later, and before she could say hi to her friends, she was inundated by all of these kids. "Ate Krizzie!" they went, excitedly, rushing to their director, exchanging hugs, posing for photographs, that kind of stuff.

The screening ended a little after nine. The kids were excited again. Krizzie went up in front of the stage (or whatever resembles a stage in the cinema), thanking everyone. Her lead finally arrived; Lauren said a few words, posed for a few photographs, and left fairly quickly. And then Krizzie's friends came out again, asking for photographs again. That kind of stuff.

I talked a bit to Bia, one of Krizzie's friends who also happens to be a childhood friend of Kimmy's. (I hope I got that right.) She also has a film out, the same SM-sponsored film festival that Krizzie's part of: her film, the boxing-themed Suntok sa Buwan, premiered the night before. She mentioned that her premiere was more intimate - a smaller venue - but still, she felt overwhelmed.

"Naiyak ka ba?" Kimmy asked her, while we were watching Krizzie get inundated again by well-wishers and bouquets of flowers.

"And the fact that it's out there," I butted in.

"And that it's just the beginning," I continued.

We left the cinemas a little before ten. Bia and Kimmy were the last to have their photos taken with her inside the cinema - the former had a snazzy Polaroid camera, one that looked like the sort that's waterproof, three minutes to develop - and the director was anxious to change her outfit. And then she found out her purse was missing. She wasn't frantic about it - I assume she's tired, which she can't be, because there's an after party to attend, which probably means more well-wishers and, perhaps, more booze - but she was worried. No use in looking for a black purse in a barely-lit cinema, though. Her mom had it, along with the flowers.

Krizzie finally had some time for a proper goodbye - not much of an improvement, considering the last time we met we only had a hi and a goodbye, but I'm not complaining. There was a photograph, which is an improvement, a surprise one. A few more customary hugs, and then I walked out of the already closed mall, worried I'd get home late. That's my worry alone. If that thought crossed Krizzie's head, well, she wouldn't have thought much about it. Plaid attitude, you know. She got through writing the film, looking for funding, getting the festival slot, shooting the film, all that. (I can only know so much through Twitter.) She'll get through all the rest, I figured. Also, it's her night. It's all hers.

Tahanan will be screened for a week, starting tomorrow, at SM Mall of Asia, SM Megamall, SM North EDSA and SM Cebu. Same goes for the two other films in SM's Bigshot Festival: Suntok sa Buwan and Balang Araw, which happens to feature a certain Carlo Cruz. I know. Our batch? Films.
And your responses...