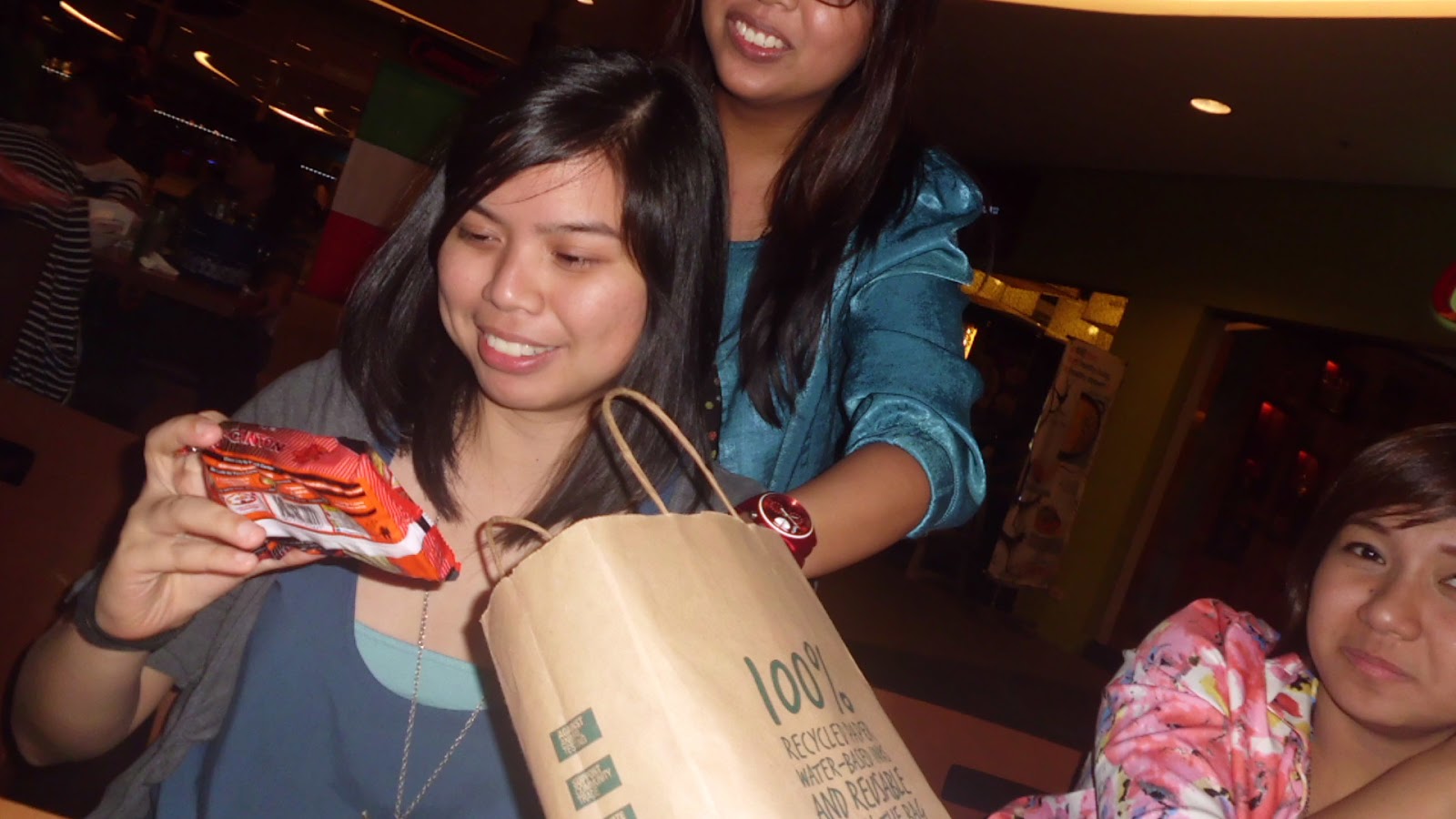 Here are the questions and answers for the category "Carlo Aquino is Lauren Montino in Disguise".

Question number one: In which film project (outside of DLSU) does Lau's name appear in?

Answer: The 11Eleven Project, an attempt to document life on 11 November 2011. You'll see her name here. She went down under roughly four years ago to study at the University of Technology, Sydney. She's since worked in accounting (for visa requirements, we reckon, since it's an in-demand job there) and has pursued, umm... pursued something.

Question number two: What was Lau struck with when she attended the block (and then some) reunion on 16 January?

Answer: In her words, food poisoning, after a weekend in Tagaytay where she ate at Chic-Boy and, her body probably not used to greasy food anymore, felt a little queasy. We don't think that counts as food poisoning, but whatever. She was forced to eat little at Krocodile Grill that night.

Question number three: Who were the first to arrive at Krocodile Grill that night?

Answer: Niko and Veia, who, to their surprise, found out that there were no reservations under the name "Lauren Montino", at least according to the server who said so. They got a table anyway, and gorged on prawn crackers for thirty minutes, having what can be literally called a heart-to-heart talk.

Question number four: What does Mafe have that Veia, Cor and Kat don't?

Answer: The label "new blockmate". Cor is Lau's friend from high school, Kat is close friends with Lau, and Veia's hung out with everyone when majors rolled in; their ubiquity means their presence in a block reunion isn't that unusual. Mafe, who's also close friends with Lau (but mostly Jill), was more of a last-minute addition. "Punta din ako kahit 'di invited," she told Niko and Ale the afternoon before the meet-up.

Question number five: How many LR19 members are related to celebrities?

Answer: At least two. Jana is related to actress and television host Janice de Belen, while Lau is related to Australian Open top seed Victoria Azarenka. If some are to be believed, Ariane is related to Rich Uncle Pennybags of Monopoly fame, although as it turns out, he made his debut in another board game from the Parker Brothers, Rich Uncle.

Question number seven: Which LR19 member once assumed the speaking voice of Sarah Geronimo in a radio ad?

Ariane. That made a bit of faux awkwardness between her and Sarah... err, Veia.

Answer: Malia, who edits the slideshows. And a bunch of others. Some might also consider Mafe, since she's a "new blockmate" who gets Jill passes some phone calls to, for some reason.

Question number nine: Which acclaimed book did Kat give Lau as a send-away gift?

Question number ten: What is the name of the Internet activist who committed suicide, ostensibly because of pressure from the American government and his alma mater?

Answer: Reddit co-founder Aaron Swartz, who was charged with illegally downloading academic journals intending to distribute them to the public for free. It's not Andrew like Niko and Lau assumed.

Question number eleven: Nena's 1983 hit "99 Luftballons" was released in English as "99 Red Balloons", but what was the literal translation of the original German version's title?

Question number twelve: From which Philippine city did Sara come from before she made it to the reunion?

Answer: Laoag. Twice in one day.

Answer: 21. Kaymee celebrates her birthday on 21 January; Loui, on 21 February; and Kizia, on 21 March. This fact flew over Niko's head until Kaymee pointed it out when she drive him, Ariane and Martin home (in varying degrees, since Ariane took a pedicab, Niko walked, and Martin was driven all the way to his front door).

Answer: No. They lost by half a point to one of the regular teams. ("Pag-alis niyo," Ale said, in reference to Niko, Ariane, Veia, Kaymee and Martin leaving, "wala na kaming nasagot.") They did win a bottle of wine, though, which is currently under Mafe's care. Also, for leading in the scoreboard by the end of the second round - thanks to competitive Mafe's decision to go for double-points on the music mash-up round, which answer board-slamming Niko somehow aced - they got a free round of shots. There's no word on who took home all the extra food, which includes a whole crispy pata, from Krocodile Grille, though.

Question number fifteen: Which LR19 member pointed out that, in the five years since the first batch of blockmates graduated from college, nothing has changed - and that there definitely will be changes five years from now?

Answer: Martin.
And your responses...