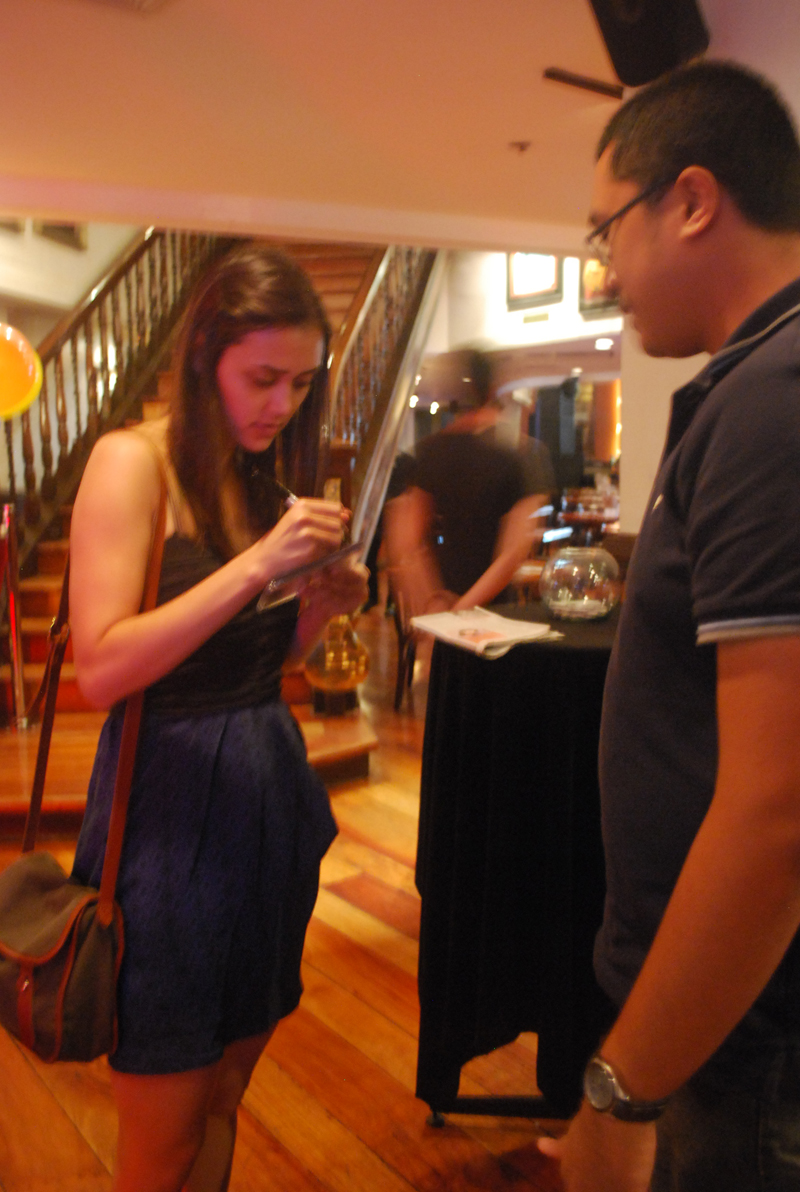 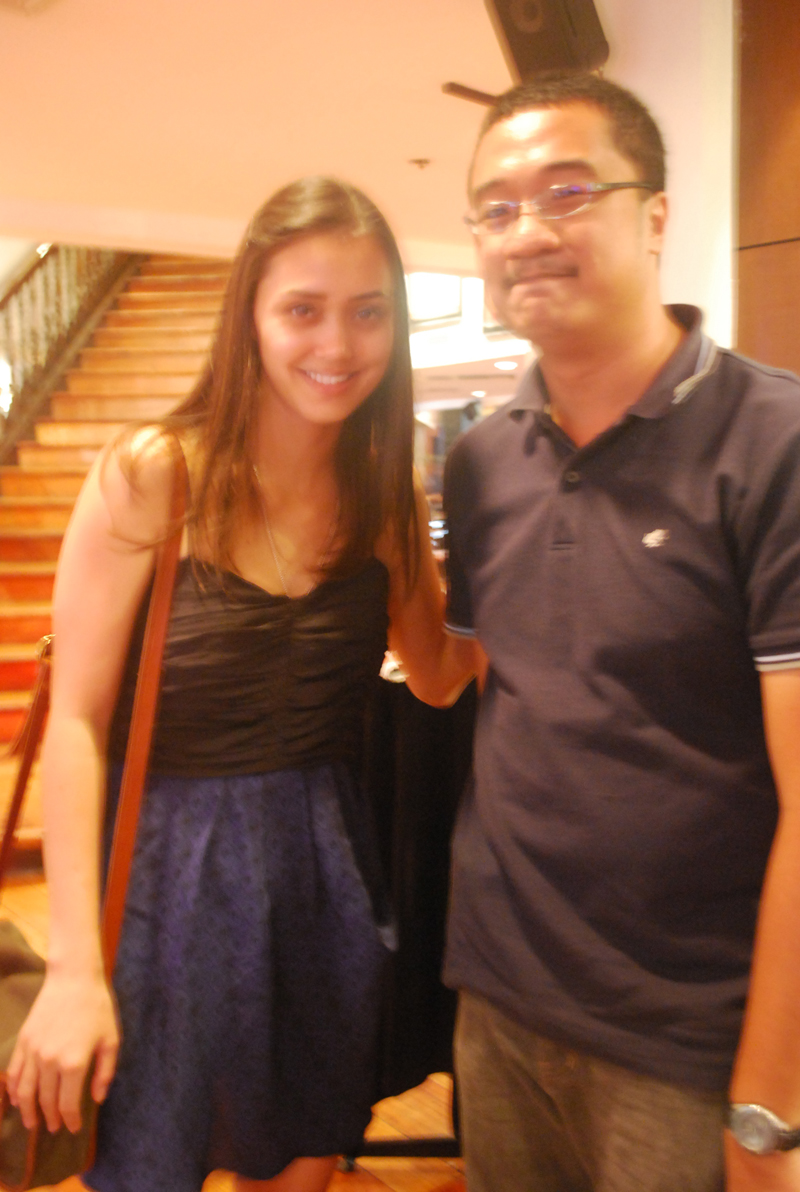 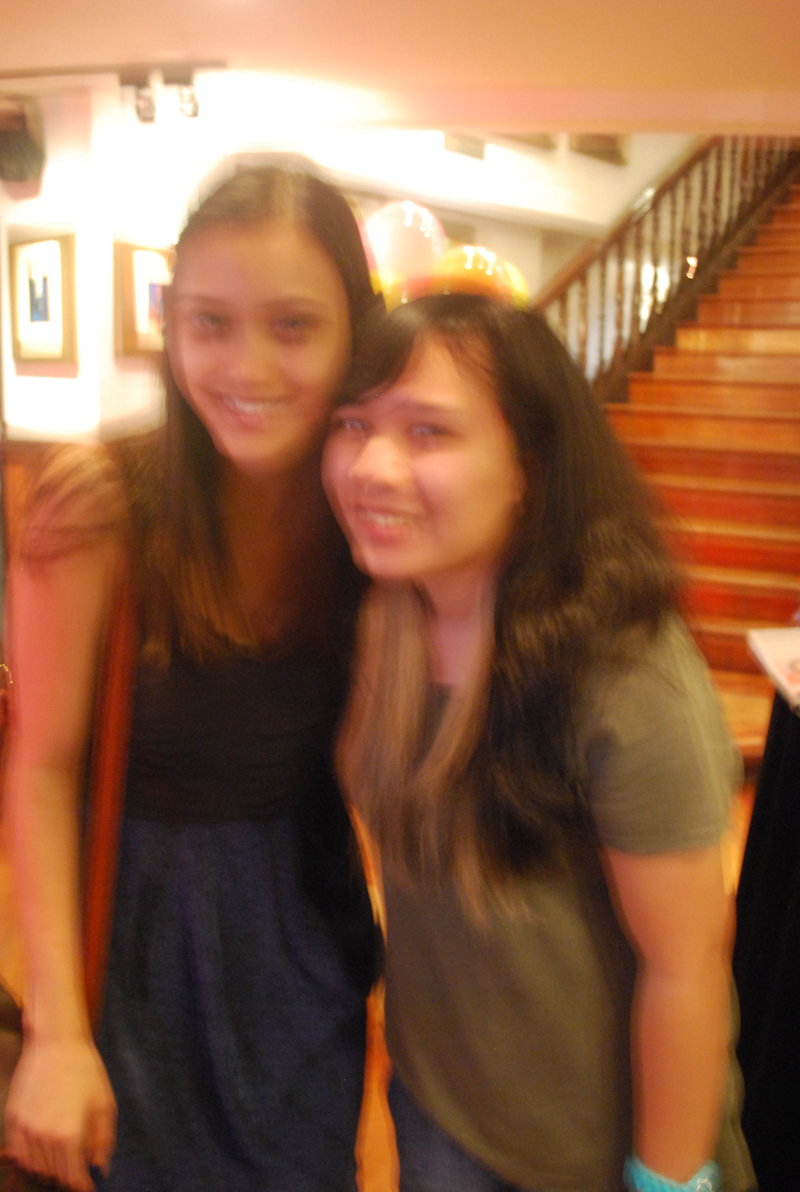 I had my Saturday mapped out, but Mika had to throw a monkey wrench in somehow.

"Nikoooo! First fifty guests get a chance to [meet and greet] Dia after the show!"

Well, I don't usually try. Well, not anymore. Okay, that still sounds wrong. The batting average is pretty low. I met Allison. I skipped Keane because of work, although I left work early that day. And I did go the extra mile to meet David in Singapore. (Kinda.) So why is it so surprising that I'd try to meet Dia Frampton? Especially since the gig falls on a Saturday? I mean, you're just getting your CD signed, right?

Mika initially wanted to come to the concert, but couldn't. One, she'd have to shell out. Two, she won't make it anyway. Relatives are coming to the Philippines and she has to lead, more or less, a whistle stop tour of the capital. But it was she who prodded me to buy myself a ticket to the concert - I ended up reserving in a hotel room in Legazpi - and it was she who updated me on anything else that came up. That, because I asked her to.

So it was she who I was talking to on the bus ride. (That, and Rainy, for, uhh, reasons.) "Daanan mo na lang ako," I told her, when she reminded me that I will have to wait in line for, like, forever, just so I wouldn't lose my slot. (If I miss out on the passes, I'm aiming for good seats anyway.) "Tapos bili mo ako ng lunch. Bayaran ko."

"Yes, yaya. What? Support the newbie!"

"You're not a newbie. Magbaon ka na lang!"

She is right. I am not a newbie. But I did not go to Cebu for David. Well, yeah, go say that I went to Singapore. That was coincidence. And I wanted to meet some friends too. Also, granted, she only went to Cebu because she won meet and greet passes, I think. Well, that was the experience I was counting on.

What I didn't count on was arriving at Hard Rock Cafe's doors and seeing nobody there.

So, fine, I waited. I bought a cheap chicken burger and ate it there. On the couch inside the restaurant. The servers let me in, well aware that a concert will happen, but, as it turns out, not much else. They didn't know about the first fifty thing. Em - the girl at the front desk at the time - was nice enough to entertain me though. More of answered my questions and engaged me in some chit-chat (it was a slow lunch hour) and, most importantly, let me into the restaurant. I was just watching music videos and trying to figure out how to get through the spotty wi-fi at the mall.

I wouldn't get bored for long, though, because I was still talking to Mika (and, well, Rainy). Apparently she was in Makati, having lunch at Glorietta, so I invited her to swing by before her parents could pick her up. After a potentially awkward first introduction - "Nice meeting you, Mika." "Mika." "Oh, so I'm pronouncing your name wrong!" "Everybody does." - we spent two hours chatting on that couch, discussing that bet we discussed on Twitter but completely forgot about since, or maybe a few anecdotes from the road, or maybe that study she did on fan reactions to local and foreign acts. (This is really fascinating.) Oh, and also, the things I need to do if I really want Dia to sign my CD.

Well, she is the one more used to these things. Buying a Sharpie for these things never occurred to me - I never really had to come up to anyone and ask for an autograph, yes? Save for those school concerts. I only needed pens for those. Or, others had permanent markers at hand. My copy of Wake Up Your Seatmate's only album was signed by ballpen, by the vocalist (Mia was her name, I think) which made it pretty hard to spot.

The other thing Mika taught me was to listen in to conversations. Well, I did these things too. But she'd shush me when anyone with a production ID would walk in and have slightly whispered conversations with the restaurant staff. Yeah, apparently nobody was paying attention to the two people chilling in the couch, who obviously had no business chilling in the couch, but somehow already knew that the sound check would be at three in the afternoon, which is why one has a Sharpie not quite hidden on his right hand pocket.

That's how we knew Dia would be walking into the restaurant through the main entrance. The main entrance of the mall. How the other fans don't know about this - how the more die hard fans, because I'm not that versed and she has less of an idea, how the die hard fans don't know about this - I will never know. It's already almost three (they all start late anyway, as Mika pointed out) and we're still the only ones at Hard Rock.

So what do we do once Dia passes through the doors?

We'll stay at the couch, We won't sit on the chairs near the events desk, because it won't give us enough space to squeeze ourselves in and say hi. There will probably be a bunch of security people. She's passing by the main entrance, after all. I'd have my inlay and my Sharpie ready. She'd sign it, we'd probably get a photo, and then she'd be off to the stage to do her thing.

"Kunwari mukha kang haggard," Mika suggested, an idea that appealed to me and horrified me at the same time.

But then she passed through the doors. Without an entourage.

I mentally rehearsed leaping off the couch and saying hi. I did that. "Hi, Dia!" i kinda said. Well, I mean I sound a bit freaked out. I'm actually meeting Dia before everybody else. Well, most of everybody else. I mentioned that I've been talking to bigger fans the past couple of days. And they don't, probably, don't have an idea that this is going on... well, outside the few tweets I sent a few hours ago.

I didn't really know what we were supposed to do. Mika and I just looked at each other. Is this happening? Yep. Now? Yep. Yep. Like, you're planning things in your head and you have almost everything mapped out and, suddenly, everything happens so fast. Mika had my camera by then. She's snapped a candid of Dia signing my CD. Then we somehow shuffled towards her to have a photo taken. I distinctly remember looking at this big, intimidating American security guy and asking him if we can have a photo. I distinctly remember him nodding.

"Smile," Mika said. The shutter decided to act up, and Dia and I both moved before the photo could register.

"I don't think that worked," I said. "Let's do it again." I probably apologized. I don't remember. We posed again. Then, we shuffled towards Mika again. It's her turn, yes, her turn, yes, to have, yes, a photo. Yes, really happening. She doesn't have a ticket and she's meeting Dia Frampton. Yes. It's happening? Yes.

My hands were shaking when I held the camera.

"Thank you!" she probably answered. I really cannot remember. Again.

But I do remember looking at Mika after all that. I looked at her awkwardly. And then we kinda laughed. And kinda squeed. And had a slightly awkward celebratory hug. No, actually, we were so surprised and giddy we didn't know what to do. She reached out for a high five, while I reached out for a hug, and we laughed like nobody else is around, which isn't exactly the case now, because they're adding tables near the stage and Dia's sitting on the ledge warming herself up. And then she took more photos, and she fawned over the idea of having met Dia, and we exchanged a few theories, and wondered if we can watch the sound check, and learned that we can't, when another security guy, a local one, from Hard Rock, ushered us out.

I did return early. Mika had left by then - her parents already picked her up, although for a moment it seemed that she wouldn't be - and I was in front of the line despite another line forming. Nobody batted an eyelash. It all felt weird. They let the ticket holders in at half past five - ninety minutes ahead of schedule - and I was ushered first, by Em and her fellow servers and the nice security guy, to the best seat in the house: table 34, smack in the middle, not too near to the stage, but close enough, and I spend the next four hours watching Dia sing without having to tilt my head.

Earlier that day I was tweeting Dexter, who also wanted to watch, but couldn't, because it's hard going home from Makati to Binondo at almost midnight. He was getting pretty jealous, and that was before all this happened. I felt oddly smug about being able to show off all this to him. Now, while walking out of Hard Rock, Mika and I talked about whether I should still go for the first fifty thing, the very reason this happened in the first place - oh, I forgot to mention, it didn't happen at all - and I wondered, well, what exactly do I have left to sign?

Why didn't I think of that?
And your responses...