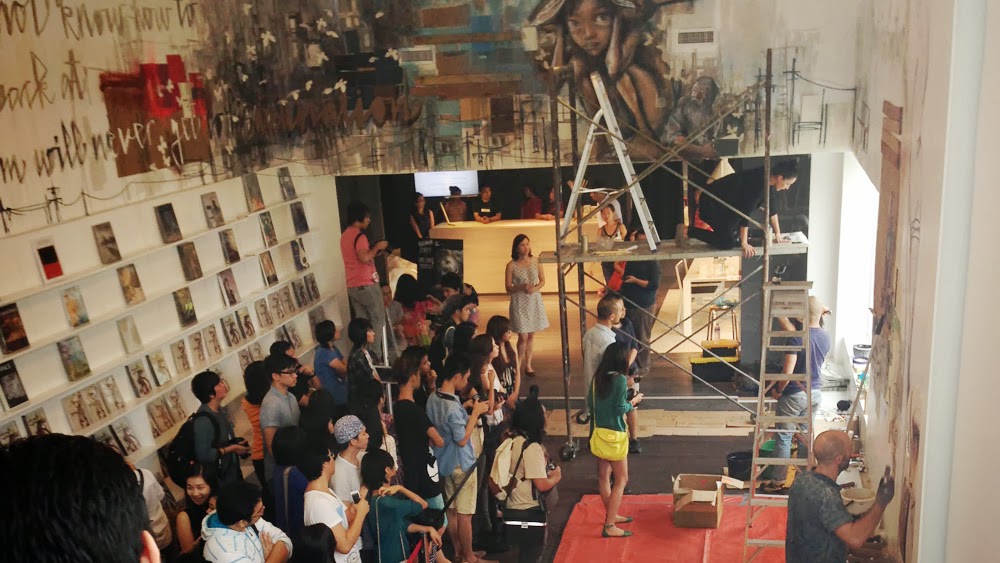 Let's start with a premise that's most likely to be mentioned in thick, scholarly books or articles in supposedly upscale magazines: the democratization of art.

A few years ago I was at Gateway. I don't remember why exactly - I don't really go to Cubao, it being a very far place from where I come from. I remember that there were some structures made from old shoes at the ground floor. A Converse thing, if I remember correctly; a thing where artists get to turn old, discarded Converse shoes into pieces of art. There ware plaques beside the pieces, explaining what the project is about.

So, yes, they're essentially art pieces. Perhaps a bit tacky, but someone out there believes that a bunch of shoes, glued together to form an angel with his wings spread out (I may be totally wrong) and painted the appropriate colors, is art. And that same person will scoff when he sees a bunch of shoppers go to the structure and take a photo beside it, like it's a mere monument to something. That actually happened, by the way.

I'm not, of course, someone knowledgeable about the ins and outs of art. Outside art appreciation class and having a bit of an idea about what makes a good photograph, art is something of a no-go zone for me. But then again, I could be wrong. No, I definitely am wrong. Someone out there believes that what I am doing right now - stringing words together to form a coherent thought, hoping to comment on some social phenomenon - is art. Similarly, someone out there believes that for something to be considered art, it has to be this and that and this and that. Take television. My Husband's Lover. A primetime soap opera, a wildly popular one, or at least buzzy, tackling homosexual relationships and how it's wrecking a marriage. Not art. Twin Peaks. A cult classic, little appreciated, definitely not commercial, a series that straddled genres and yet had a sense of what it wanted to be and how it would do it. Now that is art.

So, the age-old question: what exactly makes art? Does it convey a message to as wide an audience as possible? Or does it have to involve a considerable amount of discernment, the sort that's backed up by theory and history and all sorts of explanation, to be understood? 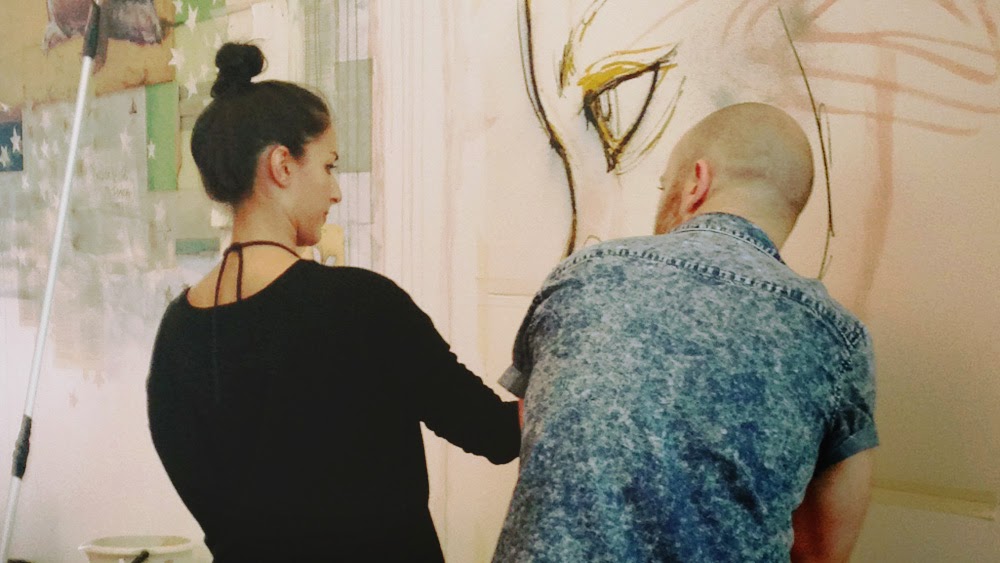 I was on a date with Rainy today - our eighth month together, falling again on a holiday - when we accidentally found ourselves in the middle of a live painting session from German street artists Herakut. I've heard of them these past few weeks; I know they're going to Manila, for half a week or so, doing talks and signing books and, ultimately, painting a mural at some part of Fully Booked's Bonifacio High Street branch. Outside of that I have no ides what's going on, except perhaps for Immie (who I know is interested) telling me about their mural being a little bit Filipino.

The site of the installation was crowded by three in the afternoon, a diverse crowd of people taking photographs. Rainy and I, caught flat-footed, were only equipped with phones. A bunch of others had DSLRs at hand, varied lenses and appendages. And then others had Instax cameras, really old film cameras... the sort that get interested looks, followed by scoffs or indifference, depending on who you are. We were allowed to take photographs, but the unspoken rule was, if you have a good camera, you can get a pass; go past the velvet rope and see the muralists in action, up close, really up close. Rainy'd admit later that she was too shy to ask for one, even if all she had was my phone.

Herakut. Jasmin Siddiqui is Hera and Falk Lehman is Akut. Two German painters who met in Spain. They went on to do graffiti murals across the world, mostly commissioned, some appearing in galleries, but most appearing on the streets, in Germany and the United States and a bunch of other places in Europe. Akut does most of the painting at the bottom - I remember him saying that he's not really the kind of guy who goes up heights - while Hera does the geometric writing, usually after spraying her hair with... I'm not sure what it is. And while they worked, we milled around the bookstore's design area, taking photographs and chatting. Hours later it all felt like cocktails in a museum, of people talking amongst each other, but always amongst themselves, and never with everybody else.

Street art is arguably one of the more democratic forms of what we generally call art - you know, the sort that involves things you put together and hang on a wall or place on a surface. It's gritty and a little urban and, if you're not really looking for it, it will seem like just any other painting on the wall and the message will still hit you. I mean, that's what Banksy does. But even this gets the exclusive definition of art. Gangs extolling their greatness and, perhaps, crudely drawing cocks to assert their masculinity - we mostly agree this is tacky and needs to be cleaned. But the unknowns who give a little more effort will get scrubbed off nonetheless, their pieces considered an eyesore no matter what most think of it.

The wall alongside the part of C5 crossing the Pasig River - it's a bit of street art, perhaps a bit too bright, a bit too pop culture-y, a bit too underground, but there's some coherence, there's no attempt to just show off. Is it an eyesore? How about the pieces that the authorities themselves commissioned - the pipes at the EDSA-Aurora underpass, the mollusks and start buttons on the same highway further south? Eyesore? Or the MMDA's abstract paintings of walls to, well, stop vandalism? Eyesore?

Rainy and I sat at the stairs, the live painting session winding to a close - it won't be finished until tomorrow - and I was thinking of how odd this all is. Don't get me wrong. I am not calling Herakut as people who merely paint on walls. But someone out there believes most who do paint on walls - those who aren't Herakut or Banksy or anyone who's part of a so called scene - are vandals, vagrants, criminals. They don't get cocktail parties. They get apprehended and arrested and jailed.

Or maybe, definitely, I was overthinking all this. But this is art. For all the talk about how everything and nothing is art at the same time, who doesn't think too much? 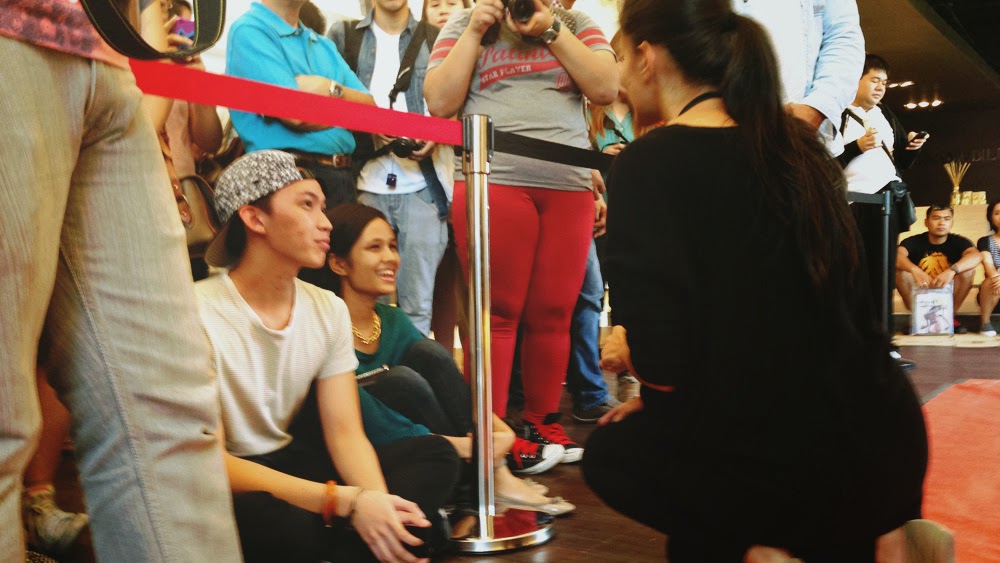 Perhaps thankfully, Herakut are a nice bunch - for a while I thought they're the sort of people you cannot disturb, under all circumstances, while doing their work. But Akut was having a beer (San Miguel, of course) and Hera was occasionally updating the crowd. Akut talked about continuing painting because that's what the crowd expected them to do. Hera, seemingly the more outgoing of the two, approached two members of the audience - by then already seated on the floor, having been there since way past three, I think - and made small talk.

"Do you have a boyfriend?" she asked the girl. The answer, judging from what she said next, was no. "Marry her," she quipped.

There were rules, but they were breaking down in a civilized way, since I found myself past the velvet ropes.

Hera made small talk with pretty much everyone. Why don't we go home and get something to eat? she asks. Not that she wants us off; we have been there for hours, after all, and they will not be done until the following day. (Rainy and I left an hour after the thing began to get some fresh air. It was getting crowded, and the paint fumes were getting to us, unfortunately, since Herakut specifically asked for better air circulation for the benefit of the crowds. We returned an hour later.) "Me, I'd rather stay home and watch television," Hera told us - me, Rainy, and another girl with a better camera - as they began wrapping up.

"What do you usually watch?" the girl asked.

"The Kardashians?" I asked.

"I actually don't like the Kardashians," she said. I forgot her reasons for it, but then she's shown an Instax print of her and her partner and remarked that she looked a bit like one of, well, the Kardashians.

"Ah, Tori and Dean. Uhh, Fashion Police?" I was being a smartass. But it didn't occur to me that Tori Spelling was in a different network, but then again, I am just a smartass, not a smart guy.

"Yes, Fashion Police. They're so funny."

The idea of them signing that Instax print came up, and the Sharpie Mika forced me to buy eight months ago suddenly came in handy. Very handy.

"It was an accident," I told the girl with the better camera.

"Accident," she said, with air quotes.

The usual reason why people do art is to be heard. "I want my message to be heard!" they'd perhaps say. Forget the bit about the people saying this being very self-absorbed and self-important. People do want to be heard, and this is just one of the ways. Herakut's piece may not yet be finished as I write this, but they talk about how it is inspired by the things they've seen during their visit to the Philippines - not their last, they say; they mentioned returning next year for another mural, "a very big wall" in Hera's words, this time outdoors, as there's a reference to spring - and complete with two quotes from Jose Rizal. And they hope - they don't have to say this - that their take on the Philippines inspires as many of us as possible.

But this is art, and art thrives in categories. Your art is my trash, that sort of thing. As Hera made one last announcement from atop a ladder ("go home and take a bite," again) and proceeded to sign some more autographs (my Sharpie, my planner, me and Rainy feeling very smug) and cuddle a baby or two (she told a couple, "go out and make kids - I love kids"), I thought that the only people who will see this, perhaps even hear of this, are those people who believe they know best and the others don't. This is art. 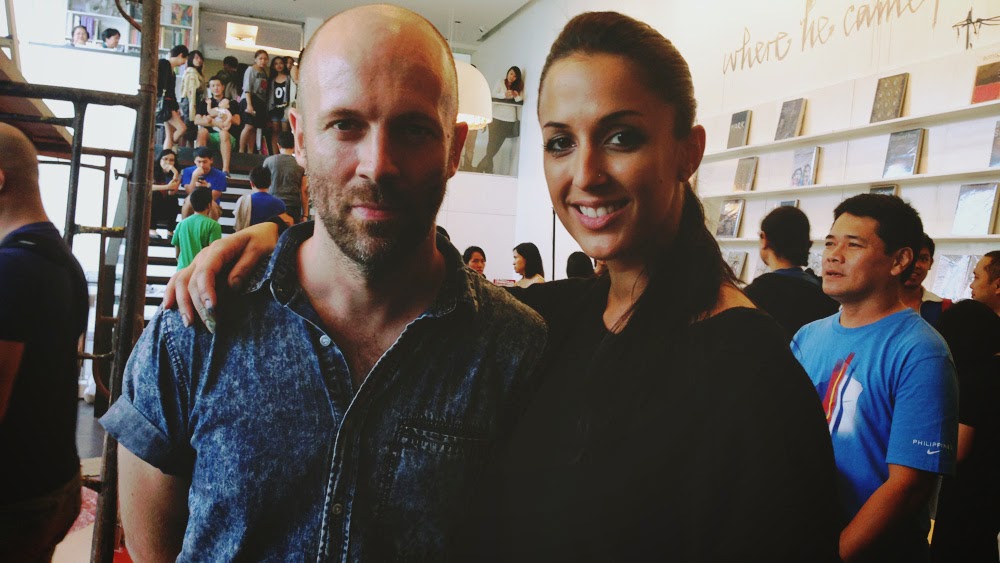